Share All sharing options for: Joshua McKinley of 'Project Runway' was an out gay athlete in high school 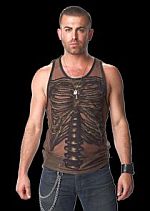 Joshua McKinley of the Lifetime show "Project Runway All Stars," was an openly gay multisport athlete at his Cleveland area high school and he is designing a dress as a fund-raiser for the school.

McKinley, 27, was a high school star in the 300-meter hurdles and also swam and ran cross-country. He told the Cleveland Plain Dealer that he was generally accepted as gay in high school and his orientation was a motivating factor in trying to be the best as an athlete.

"The example I was trying to set is, your sexuality has nothing to do with how well you perform on the track, on the field or on the court," McKinley said. "Whether you're an athlete, dancer or performer, I don't think at the end of the day the sexual orientation of the person, or their preferences, should be the issue when it comes down to competing. Whoever wins has worked the hardest to be the best.

"I would say, at that time, finding myself as a young adult and teenager, knowing that I was different in terms of my sexuality in some regards pushed me to work even harder to show people that I'm going to kick your butt on the track, and I'm gay.

"It's an interesting juxtaposition. I may be who I am, but I still beat you."

To help his high school, Willoughby South, try to erase a budget deficit in the athletic department, McKinley will design a dress to be used as a fund-raiser in a raffle. It's nice to see that McKinley has not forgotten his roots.