Photos: Andy Murray bulks up and warms up shirtless prior to Australian Open

Share All sharing options for: Photos: Andy Murray bulks up and warms up shirtless prior to Australian Open 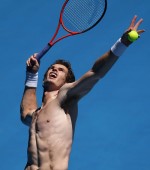 It's been extremely hot in Australia, including Melbourne, site of the Australia Open, which starts next week. Speaking of hot, that would be Andy Murray, the British player who won the Olympic gold medal in August and the U.S. Open in September and who has put on more muscle as the 2013 season starts.

Murray once again spent December building his fitness at a grueling training camp in Miami before flying home briefly for Christmas and then on to Australia via the Middle East. While in Florida, Murray worked hard on his physical strength, doubling his weekly weightlifting sessions from two to four, in a bid to boost his shot power.

Murray, 25, warmed up during an Aussie Open practice session and was nice enough to do it shirtless.