The duo wore their suits as a Halloween costume and liked it so much they did it again.

Share All sharing options for: Miami Dolphins security tells Speedo-clad fans to put their pants on

Kyle Ramey and Brendan Riley are two Miami Dolphins fans who also happen to look good in Speedos. That didn't stop security at Sunday's game against the San Diego Chargers from telling the pair to put their pants on. From Miami New Times:

"We had our Speedos on tailgating, and no one bothered us," Riley says. "We walked into the stadium with shorts on. We took them off at our seats, and security obviously came."

"I was telling him it was just a bathing suit, like on South Beach," Ramey says. "We weren't exposing anything."

The pair put their shorts back on, but they were back down to the suits 20 minutes later and didn't have any further problems.

The pair originally wore their Speedos to the Oct. 31 game against the Bengals as their Halloween costume and decided they liked it. Miami might be about the only place in the NFL where a fan would not freeze off his butt in mid-November in a Speedo.

I like the Dolphins logo they hand-sewed onto the Speedos. I think NFL Properties needs to start selling these for all 32 teams since they would be a big seller.

The pair say they will be out there again Sunday in their Speedos for the game against Carolina and why not -- the Dolphins are 2-0 with them strutting their stuff. 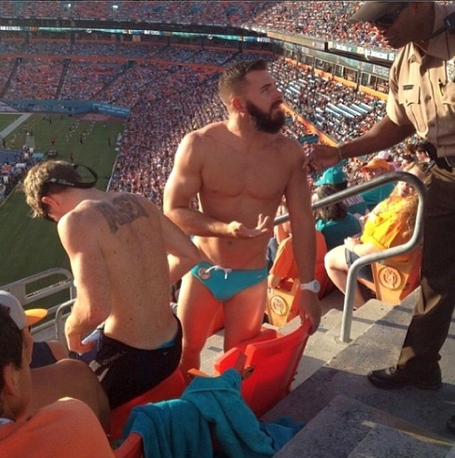 Lead photo from Instagram.
Hat tip to Instinct, which has more photos.