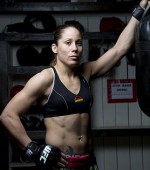 Liz Carmouche remembers the fear she had while a U.S. Marine stationed in Iraq in 2006. A fear not only of the enemy outside but of her friends and colleagues inside. Those who made hurtful comments about gays and lesbians, including a close friend who said that if gay soldiers came out they should be put on the front lines and be the first killed.

"I was always looking over my shoulder wondering if someone was trying to out me and if I would lose my rank, get kicked out of the military and be dishonorably discharged,” Carmouche said.

Carmouche had come out to a fellow military member prior to her six-month tour in Iraq, and while the friend was supportive, others weren't. It became a game among other Marines to guess who was gay or lesbian, in the hopes of getting them kicked out of the service. While deep in the closet, Carmouche was stationed in San Diego and frequented the gay clubs in the Hillcrest section and briefly dated a woman. Being exposed was always hanging over her.

"My best friend in the Marines, her name is Kim, said one day while we were in Iraq that homosexuals in the Forces should be put on the front line because they deserved to die. This was my best friend talking” Carmouche said. “I knew then I couldn’t come out to anyone but, when I left the Marines, I called Kim and let her know ‘Hey, I'm one of those people you wanted killed.'

“I was very blunt about how she’d make me feel… and she did a total 180. She told me she loved me and would never, ever want to see me get hurt. She said the way she grew up, she’d never met a gay person and didn’t know what she was talking about.

“To this day she thanks me for changing her views on gay people and now says she can't imagine why she was ever homophobic."

Seven years later, those days of fear are from another life for Carmouche, who will turn 29 on Feb. 19. Four days after her birthday, she will make history as she fights for the bantamweight (135 pounds) title in the first female mixed martial arts match in UFC history. The Feb. 23 fight is in Anaheim, Calif, and on pay-per-view as the main event of UFC 157. Her opponent will be Ronda Rousey (6-0), the current champion from her days in Strikeforce, which was bought by the UFC. 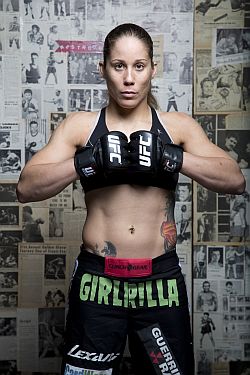 Now living in San Diego with her girlfriend of three years Elisa Lopez, Carmouche (7-2 and nicknamed "Girlrilla" for her intense fighting style), is fighting as an open lesbian. She is first openly gay athlete in the UFC.

"For so long I was closeted, so to finally be out is great for me. To do so in such a mainstream [sport] is so rewarding, since I went from one extreme to another extreme,” she told Outsports. "I'm excited to be part of history."

While being lesbian wasn't the sole reason she was picked for the fight, it did have an indirect impact. Carmouche's supporters, calling themselves “Lizbos,” used social media to persuade UFC head Dana White to give her a chance.

"Our Lizbo fans bombarded Dana White … saying give us the fight,” Carmouche said with a laugh.

“Lizbos” was a name invented by her coach at the San Diego Combat Academy, Manolo Hernandez, who has had a major impact on getting Carmouche to be more open about her sexual orientation. One way of getting her to be less guarded was to play a game where Hernandez would try and guess on whether a particular person was gay; usually he was right, she says.

"He has great gaydar and he knew as soon as he met me there was no doubt in his mind of my sexual orientation. As far as my teammates and everyone I've come in contact with, they've been nothing but supportive. In their mind, it doesn't matter. As long as they have a great teammate and someone that works and trains together, they don't care what their sexual orientation is. Male or female, it doesn't matter."

"She was a bit of a stalker-creeper,” Carmouche said of Lopez, who gave a mock laugh in horror as she listened in on our conversation. “She was taking boxing classes and I was just started to go to the gym to train and she would just accidentally sit in front of my bag all the time, so we would just start joking." They were soon dating and Lopez has seen all of Carmouche's fight save one; she is her rock prior to a match.

"She's the most supportive person I have in my life,” Carmouche said. "While she doesn't like seeing me hurt, she knows this is what I do and she supports me, so she's there for me no matter what."

Asked if the two of them have a pre-fight ritual, Carmouche said with a laugh: "We do have some rituals, one that I won't necessarily discuss,” adding, “she is the one who braids my hair for me, she's the one who helps me rehydrate."

Carmouche is aware that her coming out experience as an athlete might be unique for the positive support she has gotten from fellow fighters and fans. She knows that other athletes might have a different experience.

"I was really fortunate to find the people I did when I came out,” she said. “For a [male fighter], it would be even more difficult than for a woman to come out."

"Society still views lesbians as something that's attractive and something that's sexual and where the media plays it up to be this attractive thing. And when it comes to guys, it's not. A lot of people think it's disgusting. Until that view changes, it will be very difficult for men to come out."

Being an ex-Marine living in military-friendly San Diego is also an advantage, with Anaheim -- the site of the fight -- little more than an hour away. "I've heard a lot from Marines and other people in the military that they're backing me 100 percent and they can't wait to see me come out on top,” she said.

Win, lose or draw, Carmouche is a trailblazer, something she would have found impossible to conceive of during those dark days in Iraq. She's openly gay and proud and is using her platform to show that LGBT people are everywhere.

"Being able to come out after being closeted for so long is remarkable to me. I'm honored that I can be a role model for the LGBT community."