Two Swedish athletes at the World Track and Field Championships in Moscow have painted their fingernails with rainbow colors to show solidarity with LGBT people and their opposition to anti-gay laws in Russia. In response, a Russian pole vaulter has condemned the athletes and gay people in general.

Emma Green Tregaro, who won a bronze medal at the 2005 worlds, posted a picture of her fingers on the social media site Instagram, saying "Nails painted in the colors of the rainbow." She followed that with several hashtags, including "#pride" and "#moscow2013."

"The first thing that happened when I came to Moscow and pulled my curtains aside was that I saw the rainbow and that felt a little ironic," Green Tregaro said in a video posted on the website of Swedish newspaper Expressen. "Then I had a suggestion from a friend on Instagram that maybe I could paint my nails in the colors of the rainbow and that felt like a simple, small thing that maybe could trigger some thoughts."

Swedish sprinter Moa Hjelmer ran in the 200-meter heats with nails painted in the rainbow colors.

"Some teammates have done the same," Sweden team spokesman Fredrik Trahn said. "The federation has not discussed it. It is all up to the athletes."

In response, Yelena Isinbayeva -- who won the women's pole vault -- said what the Swedes did was insulting to their hosts, and then had this to say about gays:

"If we allow to promote and do all this stuff on the street, we are very afraid about our nation because we consider ourselves like normal, standard people," Isinbayeva, a two-time Olympic champion, said in English. "We just live with boys with woman, woman with boys. Everything must be fine. It comes from history. We never had any problems, these problems in Russia, and we don't want to have any in the future."

Hjelmer was eliminated from her event, but Green Tregaro qualified for the final of the women's high jump, which will be held Saturday.

Bravo to the Swedes for taking a stand. As for Isinbayeva, it shows how ingrained homophobia is in much of Russia, where the anti-gay laws have wide popular support.

Here is a closeup of Emma Green Tregaro's nails in a photo she posted on Instagram: 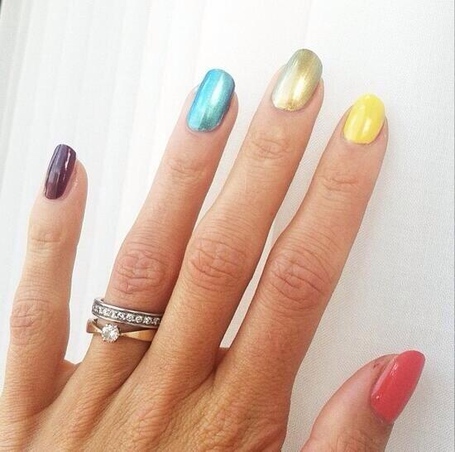