The big game was under an hour away. For three days, several dozen inner-city LGBTQ youth had been learning life lessons and the sport of basketball at the YOU Belong Sports and Leadership camp. The final scrimmage game was to be the highlight of the camp and the culmination of a weekend of work.

While most of the campers intently practiced their free throws, Rickey Johnson stood behind the three-point arc. Rickey, known as Rickesha by some of the folks at the camp, hadn't dribbled a basketball in years, having left most sports behind him in grade school. He isn't your average youth, referring to himself equally with male and female pronouns. He calls himself bisexual.

His natural family seems secondary to him. His father disowned him years ago, though there is some attempt at reconciliation. Tension pervades his relationships with siblings.

Rickey's sport of choice is dancing; If he's on a basketball court, he has pom-poms in his hand. Yet on Sunday, Rickey stood behind that three-point arc, bouncing the ball on the hardwood, preparing for a shot. Former NBA player Jarron Collins, now a scout with the Los Angeles Clippers, stood at the top of the key.

"Step up to the free-throw line," Jarron implored him. "Don't make it harder on yourself."

With Jarron standing there, Rickey buried the three.

"I can shoot threes now," he said, matter-of-fact. After two days of on-court instruction, mostly about passing and zone defense, Rickey was suddenly Reggie Miller in Madison Square Garden.

Continued after the video...

It's easy to underestimate these kids. The majority of them come from broken homes or have no home at all. Some are on track to finish high school, others are hoping for a GED at some point in the future. Some are unmarried with children. When the camp broke on the first day and campers headed out the door, several stayed behind stuffing pasta between paper plates so they had food later that night.

These are the youth the YOU Belong Sports & Leadership Initiative is focused on helping. Founders Wade Davis and Darnell Moore are making sure they do just that. The two men bring a combined experience in sports, education and activism that drives the melding of on-the-court sports instruction with community-leadership development.

At their first camp in Chicago last weekend, they pulled out all the stops. Nike supplied full basketball outfits for all of the campers, putting the youth into a basketball-player mindset. NBA Cares partnered with the camp, bringing in former Chicago Bulls center Bill Cartwright, along with Jason and Jarron Collins, to talk with and instruct the youth. NBA Cares even brought in one of their own clinicians, Donnie Arey, to coach the kids along with recently out high school basketball coach Anthony Nicodemo. WNBA player Tangela Smith, who has the record for most games played in the league, was on hand to offer words of wisdom...and even show some moves on the dance floor. The Chicago Mayor's office, along with the Retired Professional Football Players of Chicago, also supported the camp. Various members of the LGBT Sports Coalition were on hand to help drive conversations, work with the kids and even babysit the campers' young children.

The youth were overwhelmed by the support. While our culture is often in-tuned with the plight of white middle-class Americans, these low-income, often disenfranchised black inner-city youth are forgotten. Many of them shared deep pride and gratitude that people -- let alone professional athletes and Fortune 500 companies -- where extending a hand to help.

"I was surprised to see everybody here from the NBA and WNBA and the NFL," camper Alycia Davis told me. "It was a great welcome to be around so many good people who love to be around the youth and show us that it doesn't matter if you're gay, straight or transgender. You can be here and play."

As the first YOU Belong Sports and Leadereship camp waned into its final hour, I caught up with Rickey. I asked him about what he learned over three days of playing basketball, a sport he had no interest in just days before.

"You can take a lot of the things that are in basketball and apply them to your life," Rickey said, rattling off lessons about listening and teamwork.

While his love is still dance -- and he made a connection at the camp to further his commitment to dance -- he plans to continue playing basketball with his friends.

"I plan on whooping some of the boys," Rickey said. "Yeah, they think they're tough. But they can't beat me in basketball now."

For more information on the YOU Belong Sports and Leadership Initiative, visit their Web site. Davis and Moore are planning their next youth event for late this winter, setting their sites on creating a football camp in the New York City area. 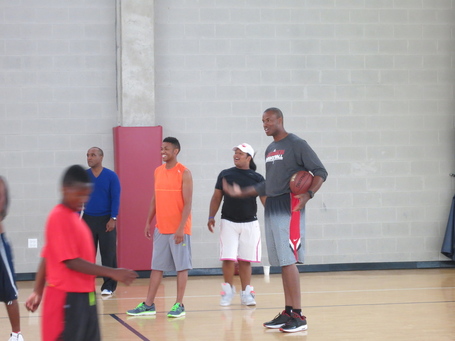 Kye Allums (orange) and Jarron Collins worked with youth like Rickey (black shirt) and others. 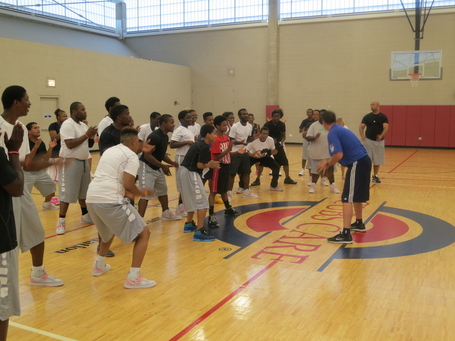 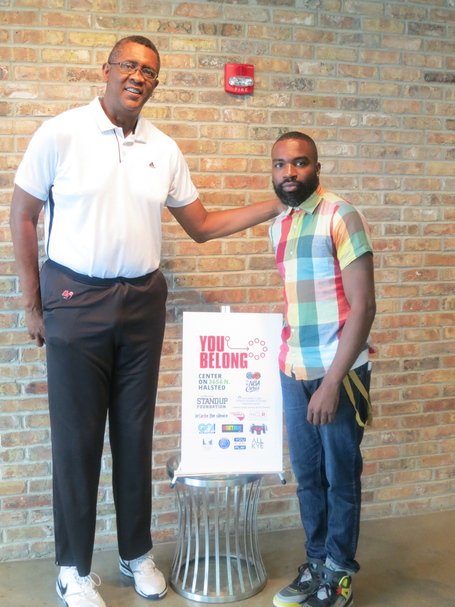 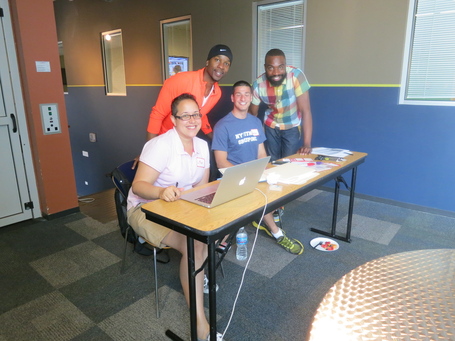