Is Torrey Smith's use of 'queen' homophobic?

We're not sure Baltimore wide receiver Torrey Smith should be taken to task over the use of a word we hear all the time. Is "queen" even a slur?

Share All sharing options for: Is Torrey Smith's use of 'queen' homophobic?

Baltimore Ravens wide receiver Torrey Smith is in hot water after posting a picture of his little brother wearing pink socks with the caption: "Look at this queen." 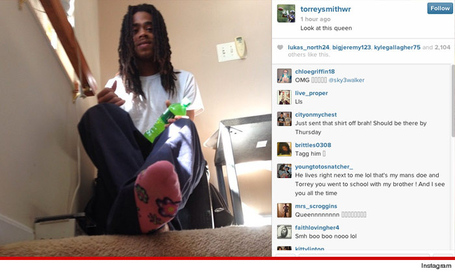 As the heat started pouring in, Smith refused to back down and upped the ante:

The things these gossip sites do to get attention smh...I wasn't being offensive nor am I homophobic not apologizing or taking it down

To be honest, it's hard for both Jim and me to get too upset about this one. First, he's poking fun at his own brother. It's not some random gay guy he stumbled across on Twitter, it's his brother. Second, he didn't use the word "faggot." He didn't call anyone "a queer" in a derogatory manner. "Queen" is something I've heard for years from gay men. It honestly never even crossed my mind that it could be a "slur," as TMZ has labeled it. Would we really be that offended if he said, "Look at that guuuuuuuuuuuuurrll" -- I doubt it. It's kind of the same thing to us.

Let's save the outrage for incidents that deserve it. This one just doesn't measure up.

Unless we hear more about this, we're giving Smith a pass on this one. Do you think we should? Take the poll below.

Hat tip to TMZ and Joe In Philly.