Why did Aussie actor resort to 'bottomphobia' when celebrating a football win?

Australian actor Rob Mills celebrated the Australian Football League championship with a photo of two "men" having sex, playoff off the idea that women and "bottoms" are weak and losers.

Share All sharing options for: Why did Aussie actor resort to 'bottomphobia' when celebrating a football win?

Rob Mills, an Australian actor currently starring in a production of Grease, last week celebrated the Australian Football League championship victory of the Hawthorn Hawks over the Sydney Swans by posting the photo below on social media.

When people called him homophobic for the tweet, he quickly recanted:

I apologise unreservedly for the photo I tweeted yesterday - it was immature and inappropriate. In the excitement of celebrating the Hawks Grand Final win, I didn't think about the homophobic implications of the image.

Didn't think about the homophobic implications? Listen, I'm not sure posting a photo of two "men" having sex is particularly homophobic. In this case however the message was clear: A man who's a "loser" and "weaker" is one who gets sodomized by another. "Bottoms," as we call them in the gay community, are somehow less than the big, masculine men who are the "tops."

It goes a lot further than homophobia - The whole dynamic is rooted in sexism. If you're a woman or a "bottom" - anyone who gets penetrated sexually by a man - then you're weaker and less worthy. It's insane and rooted in the tiresome idea that women themselves are "less than" men.

Here's the full photo. What do you think of it? Take the poll below. 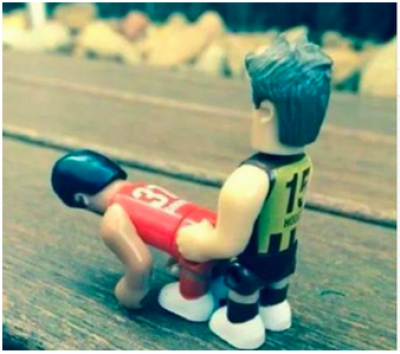 Is it offensive to see Rob Mills' Instagram photo of two men having sex to show how "his team" dominated the other?

This poll is closed