Remote Pride Houses and Uprising Of Love offer the opportunity during the Opening Ceremony to give back to the community -- and donate to LGBT groups in Russia -- while respecting the athletes we want to stand up for us.

Various friends and acquaintances have told me over the last week they'll be holding their own personal boycott against the Olympics, refusing to watch any broadcasts from Sochi because of Russian anti-gay laws.

That's a false choice. You can honor the incredible athletes at the Winter Olympics and support the fight against anti-gay Russian law. Here's how.

It does no one any good to refuse to watch the Olympics. You want to stop drinking Coca-Cola or get rid of your Visa card? Fine. But a tenth of a rating point of an NBC broadcast isn't going to do anything but give you a false impression that you've contributed to the cause.

Instead, watch the Games. Respect the very athletes our community has asked to stand with us. By boycotting the Games, you're telling the athletes we want to respect us that we don't respect the hard work they've put in. Many of the athletes are with us. They've spoken out against the Russian law. They're on our team. Don't the deserve our respect for their hard work?

That still leaves a bad taste in the mouth of some who don't want to offer an inkling that they support what's going on in Russia. My solution: Offset your Olympic viewing by donating to the Russia Freedom Fund. You don't even have to spend a penny to do it (though it's great if you can). All you have to do is watch the Opening Ceremony this Friday at a Pride House 2014 bar! The Russian government disallowed any Pride House in Sochi, so various bars across the country are hosting remote Pride Houses!

Many of those bars -- including some in Boston, New York Chicago, Los Angeles and San Francisco -- have agreed to donate $1 to the Russia Freedom Fund for every drink ordered from 9pm to midnight this Friday night. All you have to do is show up and drink!

The City of West Hollywood has even issued a proclamation declaring Friday, February 7, "Uprising of Love: Pride House 2014 Day." You can catch the City Council presentation on this video about eight minutes in.

So watch the Olympics. Support the athletes we have asked to support our community. And take the opportunity to donate to the Russia Freedom Fund either with a personal donation or by attending an Opening Ceremony Pride House this Friday night.

For a complete list of remote Pride Houses, go to Pride House International.

This Friday, during the Opening Ceremonies of the 2014 Sochi Olympic Winter Games, bars and clubs across the nation will donate $1 of every drink sold from 9 p.m. to midnight as part of a new national initiative called Pride House 2014: Uprising of Love. All proceeds raised during the three-hour timeframe will be donated to the Russia Freedom Fund to support Russian LGBT activists.

Pride House events were previously held in the Olympic Villages in London and Vancouver so LGBT athletes, fans and friends could enjoy the international sporting events in an LGBT-friendly environment. When Russia announced its ban of a Pride House event in Sochi, Uprising of Love and Pride House International decided to launch Pride House 2014: Uprising of Love to show Americans' support for LGBT Russians and Olympians. There has been an increase of anti-LGBT violence in Russia after discriminatory legislation targeting the LGBT community was passed last year. 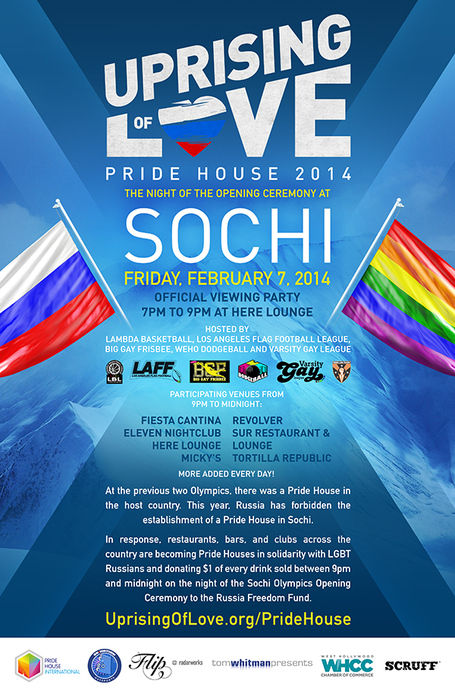