Gay Fox Sports crew member Ryan Sifferman will be sharing his thoughts from Sochi as an out gay man throughout the Winter Olympics. For this entry, he talks about using Scruff to navigate Moscow.

I'm Ryan, embedded in Sochi with the FOX Sports crew for our Olympics coverage ... or, coverage of "Sochi 14" as we have to call it for copyright reasons. Cyd asked me to send in some journal-esque entries every now and again about my experiences while in Russia, so here goes nothing!

Actually, I was supposed to get him the first one on Monday, but in keeping with the spirit of the Russian Olympics, we've experienced a few delays. At least I have a hotel room and my own private bathroom. I've seen some of the horror stories and pictures, and yeah ... yikes.

I'm the Production and Operations Manager, so the real reason for my tardiness is due to my actual work of getting our studio set up before we go on air Friday, so my busiest time of the Games is the first week. As you can imagine, having a studio built on the balcony of a newly constructed boutique hotel in Russia is not the easiest task, but we are now ready to go after pulling 16+ hour days, and I have time to share some of my experiences.

Before I arrived in Sochi, I traveled to Moscow for a couple days with my boss for meetings, to see some of the sights (it is an amazingly beautiful, opulent city, which should be expected for a major world capital that's jam-packed with millionaires), and get adjusted to the time zone. We were also there to do some additional shopping for ourselves and for some supplies, but more on that in a second.

Unfortunately, I didn't get a chance to get to a gay bar as the only night I had available was Thursday, and according to the boys on Scruff, Thursday night is fairly dead. But I did get to chat and hear some opinions on what it's like to be gay in Moscow, and other than the typical complaints ("The government are all crooks!"), no one mentioned anything about fears for their safety. Most just wanted to know if I was enjoying their city. I also learned I had a small sample size of men to chat with, as one guy told me that there isn't much "bear culture" in Moscow. Go figure, because, well, you know...

However, Scruff did end up saving the day. We had to buy some electronics for our office in Sochi: a coffee maker, blender, and a thermometer/weather gauge to use for segments. The hotel sent us to a few department stores to no avail. So I fired up Scruff and asked around, and one very nice guy named Dai gave us addresses and directions to two stores he knew would have what we needed.

Sure enough, we found a Best Buy-type store on the underground floor of a mall not too far away from our hotel, something we never would have found on our own. I made a point to tell my boss that a "gay hook-up/dating iPhone app" was the reason for our good fortune, which she found hilarious. And really, I look good for using my resources. Thanks, Scruff, or as I should say here, "Spasibo!"

I never met up with Dai or anyone else. Sorry if you were hoping for some salacious details. It's not really my M.O., so just call me a prude, I don't mind. But I am now in Sochi for the rest of the month, so we'll see what the next few weeks have in store (although our security team advises us not to go out at night, especially alone, so expect my entries to be more of the PG variety).

I will be in touch, and hope some of my tales from the road give you an insider's view of life in Sochi and Adler (Sochi's less spectacular neighbor, where the Olympic Village is actually located), or at least some entertainment while you read Outsports at work. 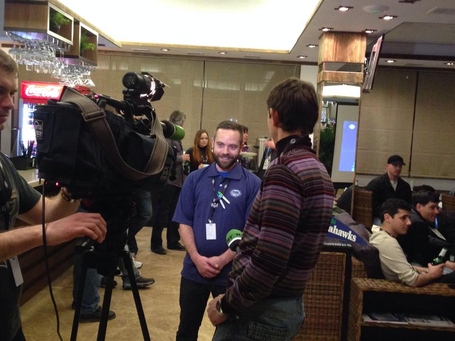