Ryan in Russia: Fearing children in Sochi, and a river of poop

Gay Fox Sports crew member Ryan Sifferman will be sharing his thoughts from Sochi as an out gay man throughout the Winter Olympics. For this entry, he talks about fear he felt when he encountered children.

Share All sharing options for: Ryan in Russia: Fearing children in Sochi, and a river of poop

Editor's Note: You can read all of Ryan's stories from sochi in our storystream. Ryan will get his bottle of wine. :-)

So I wasn't planning on getting Outsports another entry so soon. I have enough work on my plate already with FOX Sports, and really, y'all are getting what Cyd paid for (which is nada). I'm more than happy to share my journey, but Cyd, I want a nice bottle of wine when I return!

But after the first article, and the overwhelming response both on here and Facebook, I noticed some comments about not focusing on Russia's deplorable treatment of our community. And I assure you, my intention isn't to be a PR rep for the Russian government. I'm not trying to say it's a great place for gays and we got them all wrong, or that I'm glossing over the topic. Trust me, I am well aware of all this. When the bosses asked me to go to Sochi, they said it would be understandable if I didn't want to go. Honestly, it took a week for me to decide after some soul searching and talking with friends and family. But it was just too good an opportunity for my career to pass up, and I haven't regretted my decision one bit.

Besides, the topic has been covered exhaustively by some fantastic writers who are actually paid for their opinions. What could I possibly add that hasn't already been noted? Hell, even Google had a rainbow flag on their homepage today. I am here merely to share the sights and sounds of Sochi as I see them. I am not using this platform to advance a journalism career and have no plans to be an investigative reporter. It's just me and my random musings.

But there was one instance that I wanted to share, the first day I arrived in Sochi at our little boutique hotel, which we rented out for our crew. The owner, Boris (yes, Boris), has a large family and they are here from time to time, including a handful of kids. As they were being introduced to the crew, I couldn't help but think of all the things Putin, the Sochi mayor, and really all bigoted people say when talking about the LGBT community, that we are somehow a threat to children. Why is pedophilia (or even bestiality) the first thing social conservatives always think of?! Or that we add to our ranks by recruitment and not through the fact that, baby, we're born this way?

So I thought, I don't know these people or their political leanings, what if they have a deeply rooted hatred of homosexuals? If they found out I was gay, would they concoct some lie and go to the authorities to have me sent away? Would they think that I was somehow affecting their children? I highly doubt the police here would take the word of a member of the American media over one of their own. And I wouldn't have the guaranteed due process of the American legal system to fall back on.

It was a moment that really got to me, and I found myself just leaving the lobby and heading to our production office. I didn't even want to shake hands or exchange even a simple high-five with the kids when normally I'm great with children. I love ‘em. My eight nieces and nephews have my back on that fact. But it was a feeling that I have never experienced, and it really bothered me.

Was I overreacting? Probably. Were my fears valid? Also, probably. It was a heavy burden to bear, and I couldn't help but think this must be what our family in Russia experiences on a daily basis without being inside a secured compound, with their own 24-hour security team and a handful of bodyguards (one of whom is GORGEOUS! And nearly broke bones when we first shook hands ... it was both terrifying and incredibly sexy in one fail swoop).

It gave me some perspective on how fortunate I am to live in a free society like the USA, even if a good chunk of folks still hold so much fear-based hatred towards us. But know that we do have allies here along with our brothers and sisters, so don't throw all Russians into the same pot. Kind of how it seems a lot of people around the world may not like America, but love Americans.

Anywho, that's as deep as I want to get on Outsports! Just something I experienced, and since Cyd gave me carte blanche with my articles, it was something I wanted to share. Really, I'm a light-hearted guy who tries to spin life into sunshine and rainbows and the occasional poop joke. With the open canal of waste water outside our hotel, I've had plenty of good laughs with the crew already; thankfully today the wind blew away from the hotel so the smell wasn't nearly as bad, but I couldn't imagine being here during the summer heat. Oof!

That's it for this one. I gotta get going to our Opening Ceremony party. Champagne and pizza in the lobby! 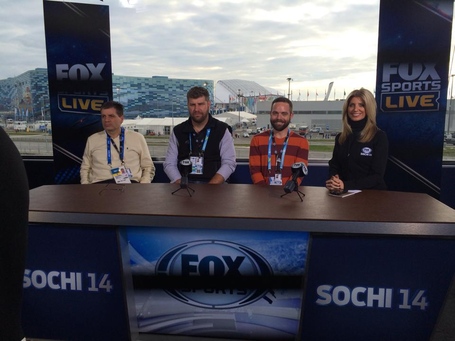 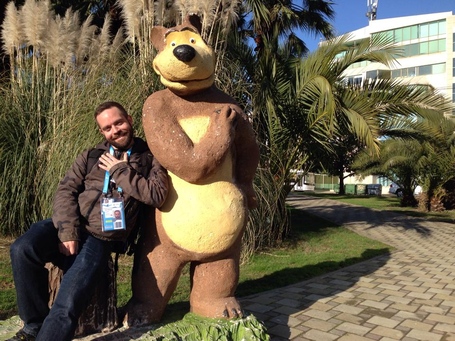 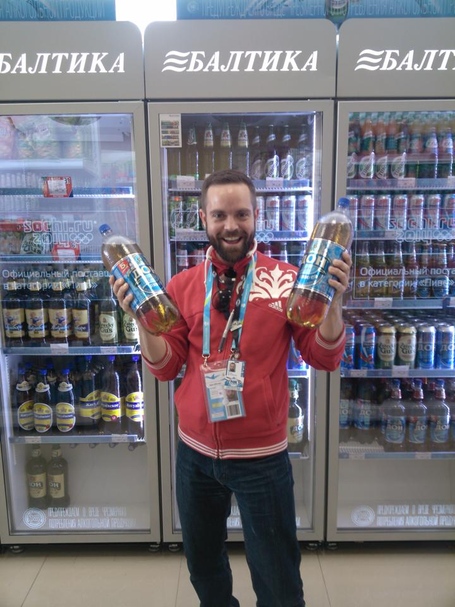