Blogger Kenneth Walsh from KennethInThe212 talks about having to choose between tennis and his "gay" friend.

Our good friend Kenneth Walsh - the brains and brawn behind the popular blog kennethinthe212 - has written a memoir titled Wasn't Tomorrow Wonderful. It's gotten some rave reviews from people like longtime LGBT activist David Mixner and comedian and writer Dennis Hensley.

Walsh shares an excerpt from Wasn't Tomorrow Wonderful. The chapter is from his early teen years, about having to choose between a "gay" friend and his junior high school tennis team (a picture of which is below - gotta love that). The ending of the story will sound quite familiar for a lot of people who were the target or tormentors of youthful homophobia.

A childhood friend of mine recently e-mailed me a team photo of the Rhodes Junior High tennis team that he'd come across in an old copy of our school paper. It was a surprisingly unsettling moment.

Part of me was thrilled, of course, having not seen the image in thirty years. But it reminded me of a dark time, when I was subjected to a barrage of homophobic bullying at the hands of my so-called friends, teammates, and coach.

My best friend on the team at the time was Jim. Somewhere along the line, Jim and I had become inseparable. Jim was a Southern California native, blond, short, and athletic to my lanky Midwestern persona. While I was always wearing tennis whites, he was super casual, decked out in a pair of Ocean Pacific shorts and Vans, the quintessential surfer boy.

In addition to being best buds on the team, Jim and I began to spend every waking minute together after school, playing tennis, swimming in my backyard, or just hanging out in my room, where he would sleep over nearly every weekend. His single mother was an eccentric Jesus freak who would hand out day-old snack cakes from the Hostess Thrift Store.  That my wacky brood brought normalcy to his life was all I needed to know.

But I also had a good friend who wasn't on the team. Greg was a grade behind us, so he wasn't eligible to play yet. But having met through the junior tennis circuit, we played a lot of tennis on the weekends. And because I was one of his only friends, he would occasionally come to my practices to hang out and watch.

It was a difficult time. It was freshman year of high school, albeit spent in junior high. All of my peers were going through the typical things that "normal" puberty-fueled teenagers were going through: first kisses, first dates, first dances, first girlfriends. I, on the other hand, was locked in my bedroom, fixated on the hunky men in my mom's Avon catalogs and sneaking a peek at the hidden-away Playgirl she had gotten as a "gag" gift for her fortieth birthday.

What the post-Will & Grace generation doesn't understand is that for many years, it wasn't even a matter of being "in" or "out" of the closet: I honestly didn't even know what "being gay" was. All I knew was that I couldn't stop dreaming about Christopher Atkins in The Blue Lagoon, and that I kept a photo of a Miles O'Keefe from the Bo Derek remake of Tarzan under my mattress. And that clearly made me very different. Certain there was no one else who felt the way I did, I figured I would eventually marry a woman and just pretend I didn't feel the way I did. It was an incredibly alienating time, yet somehow Jim made me feel as if I was normal.

When I finally got my first hint about what this "difference" was, it was not reassuring. Billie Jean King was being sued for palimony by a former lover - her female hairdresser. The media went into overdrive, and so did my brain. Billie Jean King was married: What could this possibly mean? After initially denying the allegations, King held a televised press conference to address them. My parents had it on, but I was too mortified to watch it with them, just as I had been when Billy Crystal came on the screen during episodes of Soap. So I snuck upstairs to the loft above our living room to watch from a safe distance while my parents - and the rest of the world -gawked below. I don't think they knew I was up there listening. It wasn't until the exact moment that Billie Jean uttered the word "homosexual" that I had a name for what it was that made me different. Homosexual? Wow! That's what I am.

Although it seems funny now that it would be news Billie Jean King was a lesbian, in 1981 things were very different. It was a scandal. Sponsors were threatening to drop the women's tennis tour. Billie Jean lost all of her personal endorsements. Famous people just didn't admit to being gay - even if they were.

For me, the press conference was a watershed moment. Although nothing really changed in my day-to-day life, I finally knew what I was working with. Although I felt no sexual attraction toward Jim - he was like a brother to me - it was a relief having a friend who was "like me" just by virtue of the fact that he wasn't girl crazy and he liked the same things I did. There was a strong bond forming between us; we'd even started playing doubles tournaments together away from school. Things were looking up as my first year of high school loomed.

Then one day, seemingly out of nowhere, Jim turned on me. He'd grown cold in the previous weeks, but never in my most dramatic teenage nightmare had I imagined he was busy spearheading an ultimatum that would alter the course of my existence.

Like a scene out of a John Hughes flick, Jim showed up at my house one day after school and knocked on the door. Greg was there, so Greg slipped into the den off the entryway to give us some privacy.

I opened the door and without even saying hello - much less coming inside - Jim asked me point-blank to choose between Greg and the tennis team. According to Jim, the team had been discussing the matter, and they didn't like it when Greg came to our practices. He was a "fag," and they didn't want him hanging out with us.

I couldn't understand what was really going on here. Was this their way of telling me they thought I was gay? (After all, I did model my game after Chris Evert Lloyd's.) And even if it wasn't, they were making it clear that being gay - as they had most certainly decided Greg was - was not acceptable. Just as Billie Jean King had been dropped by her sponsors after her admission, I too was beginning to see that being gay came at a price.

But still, without hesitation, I chose Greg, who had been nothing but a great friend to me from the day we'd met, not to mention the single funniest person I have ever met. I may have been shocked and terrified by what was happening - it seemed the walls were closing in on my fourteen-year-old world - but I had been raised to know the difference between right and wrong.

Jim left quietly. But then overnight, I went from being a reasonably popular part of the gang to having my phone ring at all hours of the night with each team member calling me up asking me in their best "Greg voices" - which even my mom had noted for its "fruitiness" - if they could come over tonight "to have sex," then bursting into hysterical laughter. I was horrified ... and terrified. How long before they said something directly to my family? On top of everything, our coach not only did nothing to discourage this behavior; he participated in it, going so far as to get on the phone to taunt me.

From there, I was completely ostracized by the team, and I spent the remainder of the season sitting alone on the bus en route to away meets, skipping post-practice outings to Peter Piper Pizza, and attending an awards ceremony in which no one on the team uttered a word to me. I would have invited my parents to attend - our team had done really well - but it would have been mortifying for them to see that the only award I was going to bring home that night was "Most Likely to Be a Fag." It was one of those rare moments I was glad my mom had no use for school events.

You can pick up Wasn't Tomorrow Wonderful at Amazon. The Kindle price is just $9.99. 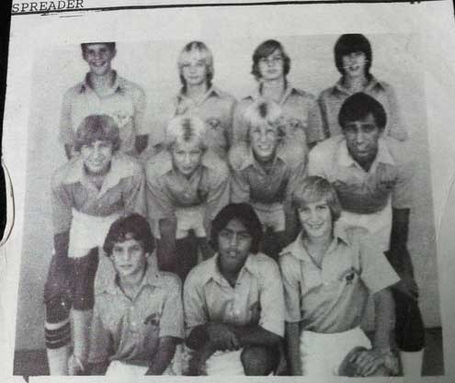