Adam Evans graduated from college in Cleveland and found support with the local gay volleyball league. He has now started a similar league in Kentucky, whose players will compete at the Gay Games.

Share All sharing options for: Gay Games a homecoming for volleyball player

Gay Games 9 takes place in Cleveland & Akron, Ohio, Aug. 9-16. You can register here - be part of the fun with Adam  and other LGBT athletes!

I am an alumnus of Case Western Reserve University in Cleveland, Ohio, the city that will host the Gay Games. Though I’ve always enjoyed athletics, my opportunities were far and few between. My father served in the U.S. Air Force and my family was often reassigned to a new base before the sports season ended.  The university was my first true opportunity to play team sports. Fortunately, despite my hesitations, my fraternity brothers convinced me to try intermural volleyball.

Though most of my friends and teammates in college were supportive when I came out, there were also those that seemed consumed by bigotry and hateful with words.  The local LGBT volleyball league in Cleveland was one of the first experiences where I could feel safe just being myself. I built friendships I carry with me today and found role models in both friends and family that helped me accept my sexual orientation. I now help lead that local organization, the Lake Erie Volleyball Association, in Cleveland. As has been done for me, I will always attempt to provide safe sporting opportunities for all athletes in the name of true sportsmanship.

In 2011 I moved from Cleveland to Lexington, Kentucky, the "Horse Capital of the World." Lexington is a beautiful, developing city with many resources and opportunities that lacked an organized LGBT sports community. In 2013 I teamed up with three other leaders to form the 501c3 Lexington Gay Sports Commission. In just a year we have grown to more than 400 athletes and fans participating in 10  different sports. 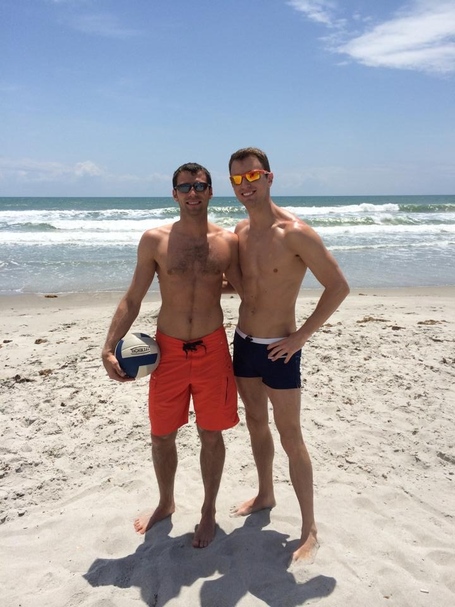 It is a community grounded in the mission to service LGBT sports and recreation interests in the Lexington area as well as national and regional sporting opportunities; its primary goal is to support the acceptance, visibility, and participation of members of the LGBT and Allied communities in professional, amateur, and recreational athletic programs without discrimination. We have been very proud to see LGBT supportive organizations such as Athlete Ally find national success in "victory through unity" and very fortunate to work with leaders in the LGBT sporting community such as Jeff Kagan of New York City.

The Lexington Gay Sports Commission creates and promotes programs that educate members of the LGBT community about the sports and recreational resources available to them. It was a logical next step to combine our efforts and become a  "champion," or coordinator, for the Gay Games committee, organizing the athletes of Kentucky in the Gay Games.

My team heading to Cleveland is comprised of A/AA players across the country. I typically play outside or right side on my team. We hope to take at least three teams from Kentucky -- 18  to 25 players from Kentucky alone -- and a lot of players from local cities such as Cleveland, Cincinnati, Louisville and Columbus.

Though this will be my first time playing volleyball in the Gay Games, I view them as the highlight of our athlete’s solidarity and the pinnacle of our efforts in the realm of sporting equality.

Adam Evans has a Ph.D. in Organization and Management and serves as an academic advisor for the University of Kentucky. He lives with his boyfriend, Chad Ford, in Lexington. He can be reached via email at adam.evans21@gmail.com.

Gay Games 9 takes place in Cleveland & Akron, Ohio, Aug. 9-16. You can register here - be part of the fun with AdamGay Games a homecoming for volleyball player and other LGBT athletes!