For gay high school track coach Jeff Sanborn, it's never too late to come out

Jeff Sanborn coaches boys cross-country and boys and girls track & field at Wethersfield High School in Connecticut. He came out as gay to his teams recently. It went without incident.

Share All sharing options for: For gay high school track coach Jeff Sanborn, it's never too late to come out

Like many men of my generation (I'm 48) I didn't come out until later in life. When I was young homosexuality wasn't talked about in the media or by the schools like it is now, so I didn't even learn it was possible for two men or two women to be together in a loving relationship until I was in college.

While that was a bit of an "a-ha" moment for me, it wasn't until several years after I graduated that I finally admitted to myself that I am gay. From there, I went into ‘don't ask don't tell' mode for several years (nobody asked) and it wasn't until four years ago that I started telling the teams that I coach that I'm gay.

Two weeks ago, the Saunders High School basketball coach with a big heart could have never imaged he would tell his team and principal that he's gay.

I was admittedly concerned about how I would be perceived when I came out. There were a few athletes on my teams in previous years who had made some homophobic comments. Two things happened that prompted me to come out to my teams.

The first was when several gay high school- aged student-athletes in other states created blogs to relate their stories. Some had more positive experiences than others, but it was apparent that they didn't have adult role models and that they were blazing their own trails as they came out to their families, friends, and teammates. While I wasn't going to blog (I did make the occasional comment though), I could at least be that role model to kids on my own teams should there ever be a need.

The other thing that happened is that the media started covering a lot of stories about bullying; Some of those being bullied were because they were gay or perceived as gay. The previous fall (2009) we had an athlete who was bullied in the locker room by a non-teammate, so it was time for me as a coach to step up and tell the team that I'm gay, and to tell them that if they became a bullying victim what they could do.

In the spring of 2010 I came out to the cross-country team gradually by starting with one of my fellow track coaches and the captains for the upcoming fall season. I was a bit nervous about what kind of reaction I'd get but my gut told me that I probably didn't have much to worry about.

I pulled the captains aside after track practice and told them that with the prominence of bullying in the news and with the size of our team (we had approximately 90 track team members) that I needed them to be eyes and ears so that we could nip any bullying in the bud should it occur. I also told them that if there were to be an incident that we could handle it in several ways depending on what kind of support anyone needed. Then the grand finale - I mentioned that if they ever learned that a teammate was gay and needed to talk with an adult or had questions, that they could refer that team member to me... since I was gay.

Turns out my gut was right: The only reaction I got was when one of the captains gave a look of surprise with a raised eyebrow.

The next fall I talked about the issue of bullying in front of the whole team. I again referred to myself as gay. Zero reaction from the team. One of the captains even stepped up and said a few words of support, as did another athlete who didn't even know this talk was coming.

While there have since been a few individuals to whom I've mentioned my sexual orientation, it wasn't until this past January after a presentation at our school about anti-LGBT language that I again mentioned it in front of an entire team. The presentation was about "that's so gay" not being appropriate language. Using such language can in fact keep somebody in the closet and prevent them from being their true self -after all, I was speaking from experience.

When I spoke to the team again this year, I also told them that statistically several team members are gay, so please be careful about word choice. To this day, nobody has ever come forward to tell me he or she is gay/lesbian, but I'm sure it'll happen someday.

My own coming out experience has gone very easily - I couldn't have asked for it to go better. There are students, athletes, and even coaches in this country and around the world who haven't had as easy a time as me, but so far, for the student athletes on my teams, my sexuality has been a non-issue. To this day the only semi-questionable reaction I've ever gotten is that raised eyebrow.

That's the way it should be. I wish it were the same for everybody and look forward to the day it is.

You can reach Jeff Sanborn via email at whseaglesrunning@sbcglobal.net. His teams also have a Web site. For more information and support from LGBT coaches, visit the Facebook page for Equality Coaching Alliance. 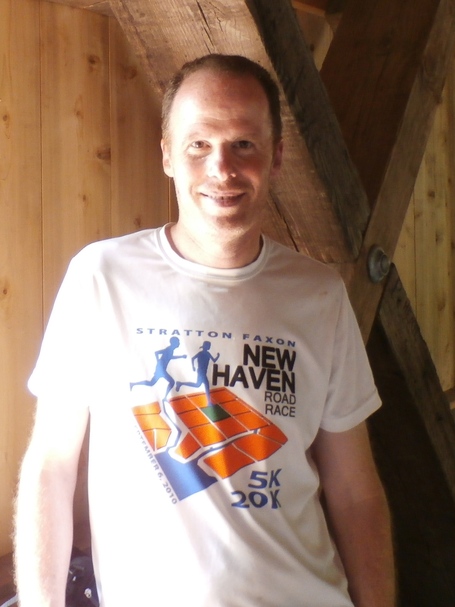