Ryan Beene grew up in a small Texas town where he took to cutting himself before opening up with family, friends and teammates about being gay.

Share All sharing options for: Texas Lutheran tennis player Ryan Beene is gay, opens up about self-harm while closeted

Growing up gay is hard enough as it is, but throw in a small Texas town and being an athlete and you've really hit the jackpot.

Growing up in West Columbia, Texas, a town of 4,000 people an hour south of Houston, the only time you heard the word "gay" was when someone was being insulted and that always seemed to be the most hurtful and insulting thing anyone could think of. In church and in sports, being gay was something I was always told was wrong. Whether I heard it from the preacher or at practice, it was always used with a negative connotation.

From a very young age I knew that all of these anti-gay comments I was hearing pertained to me, but I desperately did not want them to.

Matt Dooley is out on Notre Dame tennis team

Gay Notre Dame varsity tennis player Matt Dooley attempted suicide in 2011. He came out to his team exactly two years later, and their acceptance helped save his life.

Drougas, now a senior at Salem High School in western Virginia, delivers missive on equality as he comes out publicly for the first time.

I started playing baseball and basketball when I was around seven or eight. Even at that age my teammates were already throwing around words like "fag" and calling each other "gay" when they did something wrong. It was made very apparent that who I was had to stay a secret as long as I wanted to be involved in sports. Soon I decided to try tennis. I knew instantly that was the sport for me. I also hoped that it would be a relief from the constant homophobic slurs that were thrown around in baseball and basketball. While it was not as bad in tennis, it was still there.

When I hit my teenage years, things started to get pretty bad for me. In junior high school slurs and jokes were constant. I had always struggled with not wanting to be gay, but the increase in jabs as we hit puberty turned it into a crisis for me. I started self-harming as a way to take out my shame for being gay. I would cut myself as punishment for the thoughts I was having. I thought that I deserved it. I felt alone because no one knew what I was going through. It only got worse when I entered high school.

Somehow, I was shining on the court. I took over the number one spot on the tennis team as a freshman. It should have felt great. Instead I was so worried about people thinking I was gay and not taking me seriously as an athlete. Being at practice and tournaments just meant hearing "faggot" and "that was gay" even more than usual. I knew I had to keep what I was dealing with to myself because I didn't want anyone to know I was depressed. If they knew, I would have to talk about why, and a big part of it was because I'm gay. Self-harm and depression are not things you talked about where I'm from. Heck, they're not things kids talk about anywhere.

On top of my sexuality, I was also struggling with an eating disorder that added to how badly I already felt about myself for being gay. Between the not eating and throwing up, the depression, the cutting, and my sexuality, it was a rough few years. I was always seen as this really happy outgoing person. I was even voted best personality. I liked being seen as someone who was always happy and had no problems even if it was all an act. What can I say, I was a good actor.

When I was 16 I couldn't handle the pressure anymore. I could have gone in one deeply tragic direction. Thankfully, I didn't. I finally told my best friend that I was gay. I started telling more and more friends and by the time I was 17 I had told almost all of the people close to me.

I thought that living in a small town I would have friends hate me for it, but none did. I was especially nervous to tell my guy friends because most were athletes. Much to my surprise, they were all extremely supportive. All of the support I received from my friends really made me feel so much better about myself after the years of insecurity.

One of my best friends is the son of a preacher and even he was totally fine with my sexuality, so that was something that really gave me more confidence. All of the positive responses really helped continue the process of coming out.

However, I was still paranoid about the rest of the school finding out because I was the president of both the Student Council and The National Honor Society of the school. I was worried I could lose those positions by coming out to everyone, because I had seen stories of students being kicked out of organizations for it.

I felt I had a responsibility to keep quiet about it for my brother and parents, too. I didn't want it to cause any problems for them. My brother was on the baseball team so I didn't want anyone to say anything to him for having a gay brother. Also, I made it to the state tennis tournament three years in a row by my senior year, and I wanted it to be all about my tennis, not about my sexuality. I knew if I came out to everyone, that would somehow get dragged into tennis and I was not ready for that.

I decided to finally come out to everyone when I was 18, through Twitter. I was going to wait to tell my parents, but living in a small town, word travels really fast. My parents knew within a day of the tweet and, after the initial shock, they were fine.

Probably my favorite reaction was my cousin's. He told me he would try really hard to stop saying things like "that's gay" and how he now felt bad for saying it. 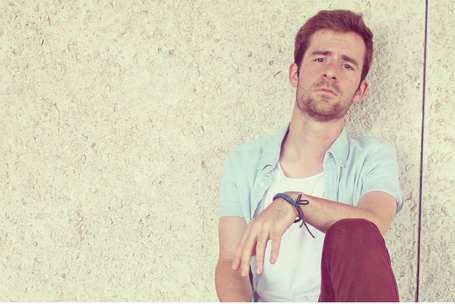 The reactions from everyone, and realizing I didn't have to hide or try to change who I was, stopped me from cutting myself anymore. It was physical and mental salvation.

However, I now had a new problem. Deciding to play tennis in college, I had an entire new team to come out to. I chose to attend Texas Lutheran University, so I was definitely worried my sexuality would be a problem at a Christian school. This time, I knew I needed to be open about my sexuality from the start because I felt like the more people that were open about being a gay athlete, the easier it would be for others who were afraid to be themselves.

While some future teammates knew I was gay from social media, there were others I had to tell. Every one of the guys was great about it. It just wasn't a big deal at all. To this day, they don't treat me differently from how they treat each other. I especially love that they joke with me about being gay. They're cool.

Some will even catch themselves saying "that's gay" or "fag" - They just look at me and apologize. My coach is also really great about it. He even checked in with me to make sure I was being treated well by my teammates. The school in general is actually a very gay-friendly place, which is not something you would think when you think of attending a Christian university. We even have a straight and gay alliance.

I did have one bad experience last season. During a match I was playing I heard some people talking behind my court saying, "I heard this guy is gay."

Though it was followed by a comment that had a slight silver lining to me: "So he's losing to a fag right now?"

I tried to ignore it, but it definitely got to me. Though I was leading the match until I heard the comment, I ended up losing.

I had a really good first season, going 10-4 and making All-Conference Honorable Mention. I still feel like I have to prove myself to everyone because I'm a gay athlete. I felt like I accomplished that this year. I'm focused on making an even louder statement next season.

Sports are supposed to be something you do because you love them and you get to take your mind off of everything else that's going on, but when you're gay in a sport, you don't always get that relief. You can feel so alone while doing something you love, because you feel like your team is against you when you hear the things they say. You should be able to enjoy the sports you love no matter what your sexuality is.

This is not something any athlete has to go through alone. There are so many people going through exactly what you are or have gone through it, and we survived it. You don't have to come out until you are ready, no matter what anyone tells you.

If talking about what I went through helps even one person understand that they can make it, then I'm happy.

There is no reason you cannot be an openly gay athlete and be proud of it.

You can find Ryan Beene on Twitter @ThatsSoRyannn. You can also email him at krbeene@tlu.edu. For the largest network of LGBT high school and college athletes, visit GO! Athletes. For a powerful project aimed at ending homophobia in sports, visit the You Can Play project. Both are members of the LGBT Sports Coalition.