Warwick naked rowers back with their 2015 fundraising calendar

The English lads set up a crowd-fund campaign for latest effort, which helps fight homophobia in sports.

Share All sharing options for: Warwick naked rowers back with their 2015 fundraising calendar

Our good friends at the Warwick University rowing team in England are putting together their 2015, some of the  proceeds of which go to groups fighting homophobia in sports. They have set up a crowd-funding site to raise money for their production costs.

Getting naked to raise money for a good cause is a smart business move and the photos below are enough to get many to buy a 2015 calendar (about $17). There are other funding levels that include video and a signed poster.

"I've had the chance to meet people from the LGBT community that I might not otherwise have met," said Laurence Hulse, a 2014 centerfold and one of the calendar organizers. "I've been able to hear about their experiences of being bullied, and struggling to come to terms with their sexuality. I hope that this is something our calendars and our films can help to address. Not just by funding our outreach work, but by making a statement. We don't mind who enjoys the calendars and films. We have fun creating them and we want everyone to have fun looking at them. It's all good!"

The calendars have raised $42,000 for Sport Allies, which fights homophobia and bullying. You can read their full press release below, but first the stuff you clicked on this story for: a video and some photos. 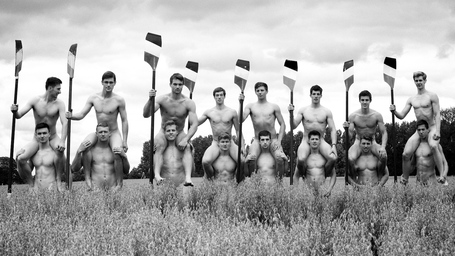 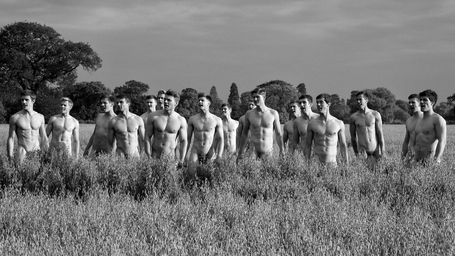 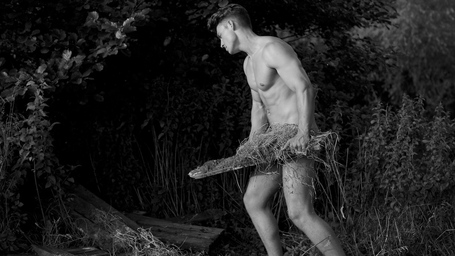 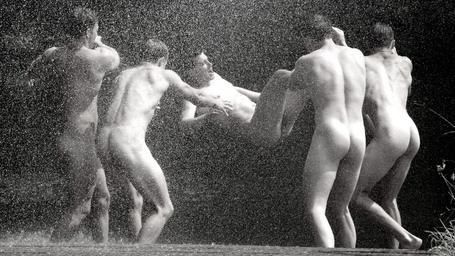 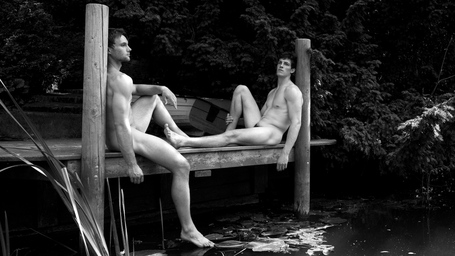 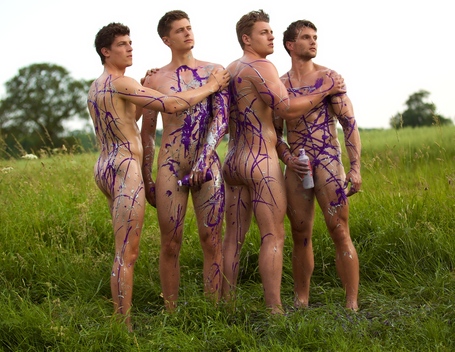 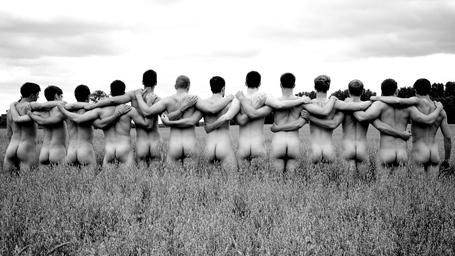 Here is the press release announcing the calendar:

The Warwick Rowers naked calendar has grown hugely in popularity every year since its launch in 2009.  But the break-out success of the 2014 calendar still took everyone involved by surprise.

The famously clothes-resistant university athletes were featured on Good Morning, America and E! Entertainment News, raised nearly £100,000 for their sport and for charity, were named Cause-Related Calendar of the Year at the UK’s National Calendar Awards (where they also picked up the People’s Choice award), and were voted National Student Calendar of the Year by their student peers throughout the UK. Sport Allies, their charity initiative to challenge homophobia in and through sport, had its national launch in February and has already won the backing of top professional services firm Ernst & Young (EY).

Today sees the launch of the boys’ 2015 crowdfunder campaign, the third they have run.  There are crowdfunder options for every pocket - from £10 for a digital download of the new calendar up to £400 for the opportunity to meet the boys in person at a live calendar shoot! Laurie (@LaurenceGHulse) , the 2014 calendar centerfold and one of the calendar organisers, explained the importance of crowdfunding to the project:

"We’re basically a fundraising project - the money that comes in goes straight out again.  We’re not sitting on some vast pile of cash, so crowdfunding is an essential part of how we pay for production of the next year’s calendars, films and everything else.   Every summer we come up with great deals and unique offers that make it possible for us to cover our costs and get the best value from our suppliers, so that as much of our revenue as possible can go where its needed.  It also means our supporters get a great deal!"

The boys can now count quite a few celebrities among their supporters, including Stephen Fry, Sir Ian McKellen, Kylie Minogue, Boy Geroge, Gok Wan, Coronation Street’s Antony Cotton and Made in Chelsea’s Caggie Dunlop.  And they were particularly thrilled to get a standing invitation to the Playboy Mansion from staunch US supporter Crystal Hefner, who bought the calendar as Christmas gifts for all her friends.

Laurie (@LaurenceGHulse), who has been involved in the project for over a year now, commented:

"It’s been an amazing journey for all of us!  In particular, though, I will never forget when we were featured on Good Morning, America last October.  We’d only just launched our website and suddenly it was mobbed!  It took us completely by surprise, and the site was down more than it was up, but we still managed to sell more calendars in 24 hours than we’d sold in the previous four years!  It then took us about a month to catch up on posting all the orders."

The boys aren’t leaving anything to chance this year.  They have high-powered web servers to cope with spikes in traffic, a professional fulfillment centre that has been making sure everyone gets their orders safely and on time since December last year, and support from a whole range of professional mentors who are now working alongside the boys and photographer/producer Angus Malcolm (@Angus_Malcolm), who is enthusiastic about this year’s new content:

"Our calendar is for a good cause, but we have always worked to make sure it’s a good product, too.  We aim to give our supporters value for money by exceeding expectations and pushing the envelope.  So after the response to our 2014 calendar, we really wanted to up our game.  And I think we have - I’m really excited about what we’ve come up with this year!"

With a new calendar format in development, a range of high quality clothing from a top sportswear designer who has worked for Nike, Adidas and Reebok, and their first Ultra HD (4k) film almost in the can, things are definitely looking good for 2015.  Including the boys, who spent six months training for a  photoshoot, which also called on the services of a helicopter, several litres of purple paint, and the fire brigade.   Ryan, one of several handsome newcomers making their calendar debut this year, was really impressed:

"I wasn’t sure what to expect, and I was a bit nervous at first.  But Angus and the whole crew were incredibly professional.  I’d no idea how much work went into doing something like this.  I ended up spending two whole days with no clothes on, but everyone was so focused on doing their jobs that it didn’t bother me at all."

As well as enabling the club to buy two much-needed new boats and make rowing accessible to more students than ever before, the 2014 calendar’s success has generated over £25,000 for Sport Allies.  Members of the rowing club have been working with other students, including representatives of Warwick Pride, the university’s LGBT organisation for students, professionals from EY, and leading figures in the voluntary sector to roll Sport Allies out nationally, and to begin the process of creating an independent registered charity.

Working on the calendar project has brought the need for Sport Allies home to Laurie (@LaurenceGHulse):

"I’ve had the chance to meet people from the LGBT community that I might not otherwise have met.  I’ve been able to hear about their experiences of being bullied, and struggling to come to terms with their sexuality. I hope that this is something our calendars and our films can help to address.  Not just by funding our outreach work, but by making a statement.  We don’t mind who enjoys the calendars and films.  We have fun creating them and we want everyone to have fun looking at them.  It’s all good!"

The Warwick Rowers 2015 crowdfunder campaign is live now at warwickrowers.org/crowdfunder, and the 2015 calendar range will launch formally in October.