Being first is always noteworthy, especially when it comes to gays in sports.

Share All sharing options for: Why college football player Chip Sarafin coming out as gay is still news

Being gay is about the least interesting thing about Chip Sarafin. Being a college football player is second. Yet those two facts combined about him have made the Arizona State offensive lineman a big sports story, despite the fact that the fifth-year senior has never played a down.

The reason for this is simple -- Sarafin is possibly the first publicly gay Division I FBS player ever. He has been openly gay in the Phoenix area for a while and came out to his team this spring, inspired by Michael Sam. Yet until a day ago, Sarafin's sexual orientation was unknown to the public. That's why we often use "publicly gay" instead of "openly gay," since in the latter a person can be open to family, friends and his team but not in the media.

"I was a little nervous when it came to my attention what a big influence this was having," Sarafin said Thursday. "I did not intend for it to get to the magnitude that it did."

Being the first in anything is always news, especially for gays in sports. Sam is the first publicly gay NFL player, Jason Collins holds that distinction in the NBA, and no one has ever done in the NHL or Major League Baseball. That's two people out of thousands of athletes; ditto for major college sports. There is still a huge amount of curiosity of openly gay players given the stereotypes of gay people and masculinity. Having a 6-6, 300-pound offensive lineman like Sarafin shatters a lot of ingrained prejudices.

How Sarafin became known publicly is a study of how news travels these days. The story was broken by Compete magazine, a Phoenix-based print magazine with a small online presence. Their profile of Sarafin was in their August issue, which was available five days ago. The magazine on its Twitter feed highlighted their cover man this month, YouTube gay fitness personality Davey Wavey. Sarafin was not even mentioned in their Twitter promo.

On Wednesday, the gay website Queerty ran an item on Sarafin, which was noticed by Joe Guckin, a Philadelphia blogger and Outsports reader and contributor since 2000. I was in Cleveland watching beach volleyball when I happened to read my Twitter feed and saw Joe's tweet.

When I got back to the hotel, I checked Google News expecting to see how many links there were to the story, but only the Queerty story appeared. I wrote a short article highlighting the news with some quotes from the Compete article and after verifying Sarafin's playing status with Arizona State.

I tweeted it out and placed it on Facebook, thinking it was a nice story but not stop-the-presses news. Sarafin has never appeared in a game and might never see the field, so I assumed many people wouldn't care. Compete smartly focused on what an amazing student he is, highlighting  his research into making football helmets safer and his desire to be a neurologist. His being gay appeared to be no big deal to him and the magazine played it that way. Anyone checking his Facebook page any time in the past year would see he was a member of the Phoenix Gaymers board game group, so Sarafin was anything but closeted.

I was stunned to check our real time Outsports stats 30 minutes after posting to see 20 times the normal amount of users on the site. Our story has receivedt 364 retweets and 2,564 Facebook shares to date, and the mainstream media kicked into gear. Outsports had become the catalyst that set off hundreds of stories, including on the evening news and a three-minute segment on ESPN. Google News went from having one link to his story to hundreds from sports and non-sports sites.

When an athlete who has never played a down gets such notoriety, it tells how big this story is still perceived to be. In addition, young gay male athletes are still thirsting for role models in their sport. Sam inspired Sarafin to come out and maybe the Sun Devil will do the same to others. A commenter on Reddit said it very well when asked the inevitable "why does anyone care?" question (click image for larger view) 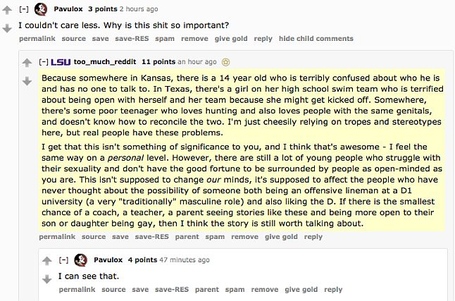 One day, I hope the number of publicly gay athletes is so large that another coming out gets a brief mention as a small fact. Until then, these coming out stories will continue to be news. Chip Sarafin, simply by being himself, will become an inspiration you young gay athletes everywhere, even if he never steps on the field during a game.

"I'm hoping that stuff like this won't be such a big news story, that people will hear stories like this and it won't be such a big thing," Sarafin told more than a dozen reporters at Arizona State's training camp. "Eventually, players will be who they are and it's just that, but right now there still needs to be role models for those types of players."