Harry Swayne is a devout Christian and a player development exec for the Baltimore Ravens. While he claims to love all people, he tosses gay people into the lot with prostitutes and drunkards. Is that a problem?

For a lot of gay people, religion is as easy of a target as some Christians have made what they would call the sinful gays. For others willing to listen and share with open hearts and open minds, there's more common ground than distance.

Enter Harry Swayne, the assistant director of player development for the Baltimore Ravens who on Friday tweeted out a complicated message claiming love for "drunks, prostitutes, homosexuals," among others... 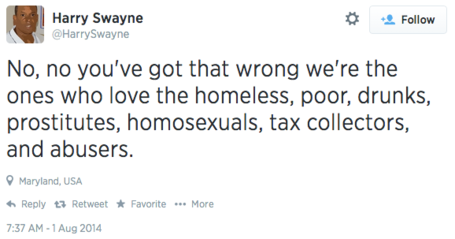 While there's a conversation to be had about Swayne tossing the "homeless" and "poor" into the same group (as though these people are somehow of less moral character and in need of singling out), I'm going to stick to the gay thing here. A lot of the issues are the same anyway.

It's not clear to whom Swayne was responding when he say "you've got that wrong." I contacted Ravens spokesperson Chad Steele asking to talk with Swayne to learn more. The Ravens said "no."

David Tyree called me this weekend. I believe everything he told us last week through his statements to Wade Davis.

The former Oklahoma standout says his Christian perspective on homosexuality would not affect his treatment of a gay teammate.

So I did some digging. While some gay people will quickly tar and feather Swayne's name due to him equating us with prostitutes and tax collectors, Swayne's tweet and other tweets of his have some interesting, revealing elements.

There's clearly a religious message to what he's saying. Swayne's Twitter profile says, "Doesn't get any better til the Lord returns!" I don't think that's a commentary on the It Gets Better project. Rather, it's a clear declaration of Christianity for the former chaplain of the Chicago Bears.

The equating of "homosexuals" to other declared "sinners" like prostitutes, abusers and drunkards is a common practice for many Christians and another tell-tale sign of the message Swayne is sending. It relates to the "love the sinner, hate the sin" mantra that has given many Christians cover to support discriminatory laws while claiming to love everyone. It's a message I've become all too tired of. If you want to talk about loving me, then talk about loving me. Don't call me a "sinner." Sadly, by tossing my relationship of 11+ years in with those other categories, Swayne does just that.

With all of that said, the tweet certainly has a positive message for gay people. At its core, the message from Swayne is one of support. Distilled to its core, "I love gay people" is the message Swayne is sending. Swayne wasn't trying to equate gays with prostitutes, even if that's what he did. His intent, as clearly as I can discern it, was one of warmth. Sure, chances are he doesn't support same-sex marriage. But whether he does or not is irrelevant at this point: Same-sex marriage is legal in Maryland, the national tide toward equality is irreversible, and it really doesn't matter what an executive with the Ravens thinks about it.

I take his intent from some of the other interesting tweets from Swayne over the last six months, as he doesn't seem to simply walk in lockstep with the politics of church or masculinity.

Not exactly your typical "men act like men" quote:

Real manly manhood is characterized by meekness. Men who bridle their strength, power, & influence by allowing themselves to be directed.

He defended a Satanic group's right to speak:

I can appreciate this student group willing to stand up and do something about their beliefs being attacked. http://t.co/cjqdunxe9G

On the importance of a non-divisive church:

It's not enough to not be divisive be the "glue" that makes your church a place others would want to follow. http://t.co/is3nS4mCe8

Then, of course, there's this one:

There's a real disconnect between how Swayne's message about "homosexuals" is sent and received. Again, many gay people are no fans of Christians, many of whom espouse a religion that has for decades been used to attack our humanity.

Because so many gay people and Christians have put themselves at odds with one another, the Ravens will likely never allow Swayne to have a conversation about it with me or anyone else in the media.

Another wall is left firmly intact.