BC Lions honor gay pride weekend in Vancouver and not all fans are happy about it.

Share All sharing options for: CFL team changes colors for gay pride, brings out the haters

The BC Lions, a Canadian Football League team based in Vancouver, changed the color of the team's logo on its official Facebook page to rainbow to honor gay pride weekend in Vancouver: 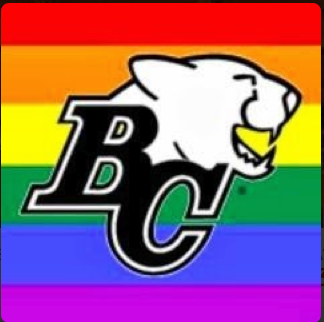 It was a nice gesture, and seemingly harmless, but it brought out the haters:

You get the idea. Fortunately, a bulk of the commenters were supportive, with many saying the negative reaction shows the need for such a display by the Lions. The best rejoinder was this:

A general response to people asking why there needs to be "gay pride":

If you were born into a culture where being yourself, in this case, being gay, was considered abnormal/wrong one usually grows up ashamed of themselves. They are afraid to talk about their loved ones to coworkers, afraid to hold their partner' hand in public, afraid to be different.

Gay pride is a way to show not just others but yourself that you are worthy of love and you are proud to be who you are, again, in this case, gay.

Until homosexuality becomes normalized in our hetero-normative society, there will be a need for gay pride for people to reaffirm their self worth.

The BC Lions did not back down and even included a link to a You Can Play video by one of their players, Marco Iannuzzi.