Sam's first game feels a lot like an NFL game 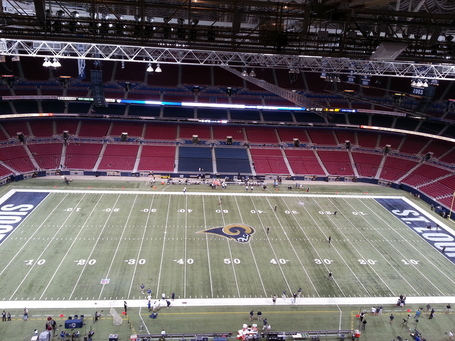 Did a quick tour of the premises and a couple small parking lots before the game. No rainbow flags, no twinks. Feels an awful lot like a football game around here.

It's been mostly cloudy with some drizzle all day. Casually chatting with fans, not much attention seems to be paid to Michael Sam by Rams fans. For a franchise without a winning season in about a decade, they're more interested in the development of Sam Bradford and the shoring up of key starting spots than one of the team's four seventh-round picks.

Settled into the press box and got a "front row" view of the game. The empty stadium is already seeing a trickle of fans over an hour before the game. I'm sitting next to Tom Pelissero of USA Today, who is also writing about Michael Sam at the game tonight.

History in the making an hour from now....