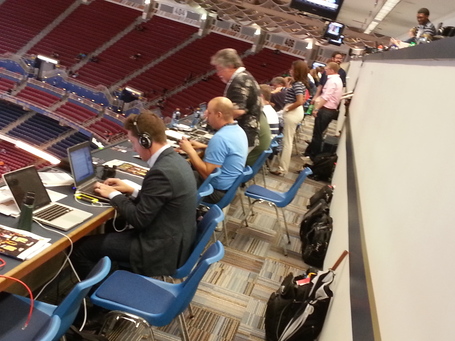 Despite warnings by countless "experts" declaring that Michael Sam will bring a "media circus" to the St. Louis Rams, the press box for his first preseason game is somehow quiet. There are no clowns running around smashing people's faces with pie (though there is a s'mores doughnut that I just might have to try before I leave). There is no band marching through, no elephants, no ring leaders whipping the media into a frenzy.

Instead, the eight seats to my left are empty. The sports writers are going about their business writing some pregame notes, talking about the season ahead.

I asked Howard Balzer how the city is responding to "the Michael Sam story."

"It's so over-blown," he told me. Even when Tony Dungy said he wouldn't have drafted Michael Sam, it was a blip here in St. Louis. As I said earlier, for a fanbase that hasn't had a winner in a decade, a gay guy is hardly news.

Sure, there are sports writers here tapping away at their keyboards about Michael Sam. Yes, there will be columns written about it tonight. There should be.

Media circus? Not even close.