Ryan Mizner has lived a double life, dabbling with being a gay man yet completely closeted with the Central Michigan University men's basketball team. On a trip to Fire Island last summer, he found the strength to make those two lives one.

It was his trip to Fire Island this summer that did it.

Ryan Mizner had spent all of his life in rural Michigan and the Upper Peninsula, a million miles and several lifetimes away from ever being able to live his life as an openly gay man. The graduate assistant for the men's basketball team at Central Michigan University had found himself encircled by the world of big-time college sports, where the casual expression of homophobia seemed to be not just a rite of passage, but a right.

His daily routine was dominated by sweatpants, sweaty basketball courts, talk of women and late-night beers. It was the last place a gay man could ever feel welcome being his true self, he thought, a "straight" world in which so many gay men today feel desperately isolated.

"I could never come out," Mizner told me when I met him, circling basketball coach Anthony Nicodemo and me in a bar at the Final Four last April. It was impossible to him, just seven months ago, that a graduate assistant in big-time college basketball could ever be accepted for being gay. The players, the coaches, the staff would all reject him. Even those who embraced him would be powerless against the homophobic coaches who inevitably made the hiring decisions.

Like so many other men and women at his level, Mizner wants to advance to the title of "assistant coach" somewhere in college basketball. Coming out as gay to anyone would make that impossible.

Or so he believed seven months ago.

His weekend on Fire Island this past July changed all of that. While isolated in its own right, the Fire Island Pines, 90% comprised of gay men in the summer, has no basketball courts or talk of women (except between the lesbians and passing references to Madonna). Sweatpants are replaced by speedos, late-night beers transform into fruity planters punches and cosmos at low tea. The Pines in the summer is to gay men what Cancun is to straight college jocks on spring break. 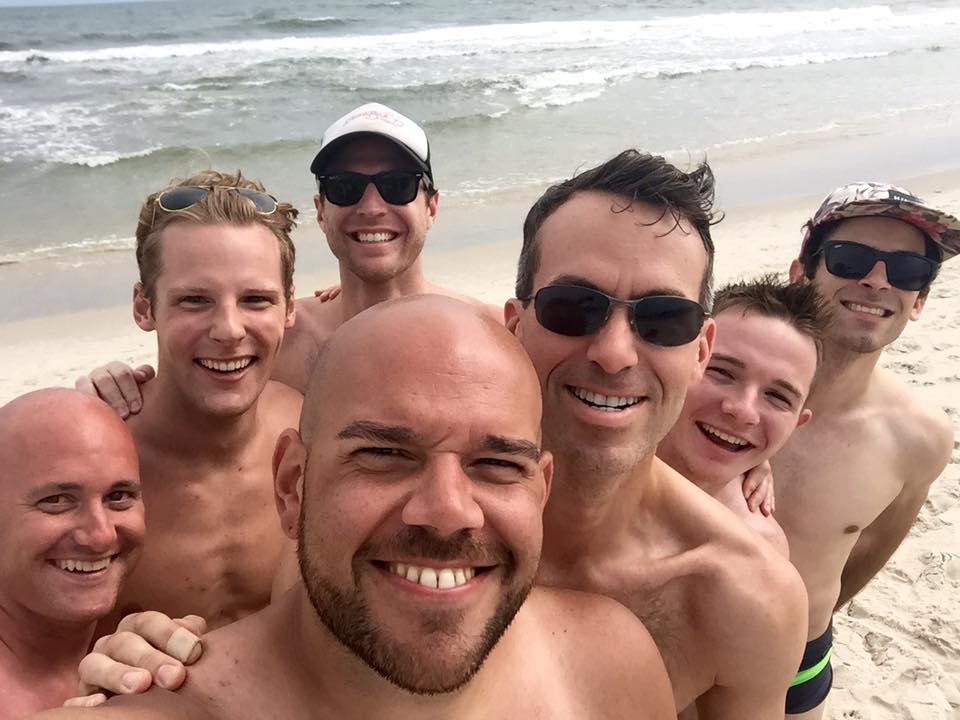 Mizner spent the weekend in the belly of the gay community with other men in the sports world who had come out previously on Outsports. Nicodemo and I had organized a small house including college football player Conner Mertens, elite USA swimmer Tom Luchsinger and swim coach Sean Smith. Spending the weekend in the sand dunes with other gay men in sports, Mizner found a sense of place once completely foreign to him.

"I've never gone to a beach where there are speedos everywhere," he remembered. "And the tea dances and the clubs. Being around all of those other gay guys for a long weekend and just being in that environment, it made me feel that there's a large community. It was a sense of relief, being around other gay guys and being free. I could look and act however I wanted to look and act without any fear.

After only a few days, of course, Mizner did leave. He returned to Central Michigan with the martini shakers and pounding surf a vivid distant memory. He had found community on his trip to Fire Island, something he had been desperately lacking as a gay man, and he never again wanted to let go of those people he had bonded with in just a few hours on the beach. He never again wanted to lose that sense of freedom.

Yet his community at school was still a thousand miles yet a world away.

Thankfully, for Mizner's own mental well-being, something clicked in the Pines.

"Hanging out with other gay men that weekend gave me the confidence to not care anymore what people think. Talking to other guys it made me realize people nowadays really don't care. If they're as close to you as you think they are, they're going to love you for it. And they won't expect you to change."

Still, being "free" on Fire Island is a requirement. Back home it would take some work and some heartfelt conversations.

Mizner had bridged the gap between his gay and basketball worlds once before, with college basketball player Derek Schell, the Hillsdale College athlete who came out publicly a couple years ago. Schell's story on Outsports had hit Mizner hard. The two played against one another while Mizner was an assistant coach at Lake Superior State. When Schell's story hit Outsports, it became the talk of his team, who had been scouting Schell in preparation for a game. Mizner, deeply closeted to everyone in basketball at the time, was suddenly talking about "the gay basketball player" with his fellow coaches. It was surreal.

Schell eventually became the first person in basketball to whom Mizner came out, his first lifeline to a better life.

Over a year later and now at Central Michigan, Mizner was suddenly on a mission to come out to everyone else. He did not want the feelings he experienced over the summer to just drift away.

Slowly he told people in and around the basketball team. Another graduate assistant. The SID. Player after player. Every one of them thanked him, embraced him, and playfully teased him for the pictures on Facebook from his weekend with "the gays": Some of them had already seen the conversation coming. People in the know took bets as to when he would tell the rest of the staff. Far from a point of consternation, Mizner's suddenly quick journey out of the closet became a bit of a game for the team.

"What's changed is the support I've gotten from my community, this idea that this is who I am, and if I'm not going to be accepted, then I don't want to work for you anyway."

One of the men Mizner most feared telling had used anti-gay language in the past, not realizing there was a gay man around. Mizner was sure his coming out would cause a problem.

"Now we're closer than we have ever been," Mizner said of his talk with that coach. "We talk every day and have a great working relationship."

Another member of the team was Kevin Gamble, the former Boston Celtic and teammate of Larry Bird and Kevin McHale, who had come to the team as an assistant coach in 2012. During a round of golf when Mizner was hitting the ball into every bunker and patch of rough, he decided before a particular putt that it was time to share his truth with Gamble.

"Great," Mizner remembered Gamble telling him. "Now will you please hit this putt?"

Gamble said he has several friends and family members who are lesbian and gay, so he couldn't have been less fazed by Mizner's revelation.

"It wasn't a big deal to me," Gamble said. "Ryan's a professional. He's going to be a good coach. It never crossed my mind about was he, is he. It didn't matter to me. It didn't bother me one bit."

Player after player, coach after coach, Mizner eventually came out to everyone with whom he could steal five private minutes. Like Gamble, so many of the people in sports he has come out to over the last couple of months have long since moved past any issues they could possibly have with gay people. They too have friends, family members and acquaintances who are gay. By the time Mizner has told most of them, they've heard the coming-out speech at least a couple times. They know it doesn't change a thing.

One player in particular was truly upset that Mizner had hidden his true self as long as he did.

"You should have told me earlier," the player told him. "You know I don't care. Nothing's coming between us."

It's not like the majority of responses to Mizner have been positive. They have all been supportive. He's heard "absolutely zero negativity to the point where he has questioned what on earth kept him so afraid for so long.

"The CMU community is a very accepting community," Mizner said. "It's a family here."

Earlier this semester, Mizner brought his two communities together in a big way. He got funding for a visit by swim coach and former Rutgers swimmer Sean Smith and former Nebraska football player Eric Lueshen, both gay men, to visit campus and talk with various members of the athletic department and CMU community about LGBT inclusion. Mizner said the workshops and conversations could not have possibly gone better for everyone involved.
Yet the most powerful result was that for Mizner. To see CMU athletic department embrace these conversations has given him a completely new outlook on his life. The department is even creating safe spaces for trans athletes and coaches, something way ahead of the curve for most NCAA schools.
Now that his two worlds are one, Mizner has never been more clearly focused on the season ahead. After an early exit in last year's post-season NIT, Central Michigan is favored to win the Mid-America Conference this season and earn a trip to the NCAA tournament. Taking the team to the tournament, one year after first meeting some of the people in the LGBT sports movement, would be the perfect ending to a perfect year.
After this season, Mizner's attention will turn to his continued most daunting task. Like most men in his position, he doesn't want to remain a graduate assistant for the rest of his life. He has his eyes on a coaching position whether that's at CMU or elsewhere. That annual job search had been the most iron-clad shackles on Mizner for years.
"The reason I lived so closeted was because I'm trying to make a life out of coaching college basketball. I want to be at the Division 1 level. What worried me the most is how people would perceive me when I went to get another job after this season and how they will perceive me. Will they not hire me because I'm gay? Will I not get an interview because of it? Will they not even call me back? What's changed is the support I've gotten from my community, this idea that this is who I am."
While Gamble thinks the idea of a gay coach might be "foreign" to some people, he doesn't think that will stand in Mizner's way of landing an assistant coaching position.
"I don't think him coming out is going to hurt him getting a job," Gamble said. "Ryan does a good job. He's going to be a good coach. If I were a coach somewhere and I wanted to hire Ryan, and he came into my office and his references panned out, I'd hire him."

"I want people to understand that there is a support structure. There is support in NCAA and Division 1. There isn't a need to be afraid in today's society."
Mizner isn't worried about that anymore. He remembers one particular conversation on Fire Island that was maybe the most important of his long weekend.
"Would you want to work for someone who couldn't handle you for being gay?" His friend asked.
Mizner thought for a moment: Would he take a job, any job, if it meant he might not feel comfortable again just being in his own skin?

"Not now."
The most powerful part of coming out for Mizner? He now knows even if one person has an issue, there are many other programs that won't. Big-time college basketball's attitude toward gay men isn't what it used to be.
Mizner looks forward to being a resource for other men and women in big-time college sports who struggle with being their true selves. You can email him at mizne1rd@cmich.edu. You can also find him on Facebook and on Twitter @RyanMizner.