Gay professional surfer Craig Butler once bullied kids during his youth. It's one of his biggest regrets. Now he is trying to change how people look at gay men in sports like surfing.

Share All sharing options for: This gay pro surfer came out to his "mates" when a grocery clerk hit on him

Professional surfer Craig Butler came out publicly in a documentary film, Out In The Lineup, and everything has come up roses ever since. Not only have the reactions of his friends, family and fellow surfers been amazingly positive, but he reports he has since secured a sponsor in popular surfwear company O'Neill.

We caught up with Butler last week as he surfed the waves in Taiwan.

What were you afraid of before you came out on Facebook and in the movie?

I was afraid that people would think differently about me, that the Craig that people have known for years would no longer be and that the new me that they would learn to know about would ruin all of the respect and accomplishments I've achieved over the years.

I've tried so hard since I was a kid to be liked and to try to build a name for myself as a surfer. I thought that if people found out that I was gay that they would no longer want to be associated with me and would think of me as just another stereotype.

Gay surfer film 'Out In The Lineup'

Out In The Lineup explores homophobia faced by gay surfers.

Gay surfer film 'Out In The Lineup'

Did you get any negative reactions from surfers or anyone in the surfing world?

I was surprisingly shocked that I did not get a single negative reaction.

All the locals at home know that I'm gay, and they're not afraid to give me some harmless playful stick about it in the water. I like it that way, as I'm usually the one to instigate it. As a mate of mine that I do a bit of traveling with for surf put it, "If someone stops liking you for being gay, then what kind of messages does that breath about that person?" That is very true. I can't think of a single person who would want to hang around with a person who doesn't like someone for being LGBT. I only found that out after I came out.

There's a lot of love and equality in present-day Ireland. The dark days that our parents and grandparents grew up in are long gone. The Catholic Church no longer has a strong hold on everyone. People are no longer shamed and locked away in a closet. There was a landslide vote for same-sex marriage last spring In Ireland. Unfortunately I wasn't at home to vote, but it was really cool to see people -- surfers, non-surfers, young and old -- going out and voting "Yes" and urging people to do the same. I think everyone was happy in some way that they could be a part of a better future.

What was the best reaction you got?

The best reaction that I got was singly one of the most memorable moments of my life. It happened earlier this year while traveling in New Zealand with a group of childhood friends.

At the time there were only three of us. The other two lads are big into their women. One of my mates has known that I am gay since school, and my other mate I've gone to great lengths to hide to him the fact that I'm gay. He's a really good guy, but I just thought that because we had such a great friendship and that we spend a lot of time traveling and camping together on surf trips that he would no longer want to be a part of that and try to distance himself.

In Gisborne we would go into the local supermarket two or three times a day for breakfast, lunch and dinner. While going to this supermarket, this local girl working there started to get acquainted with me and started full-on flirting with me every time I would go in. 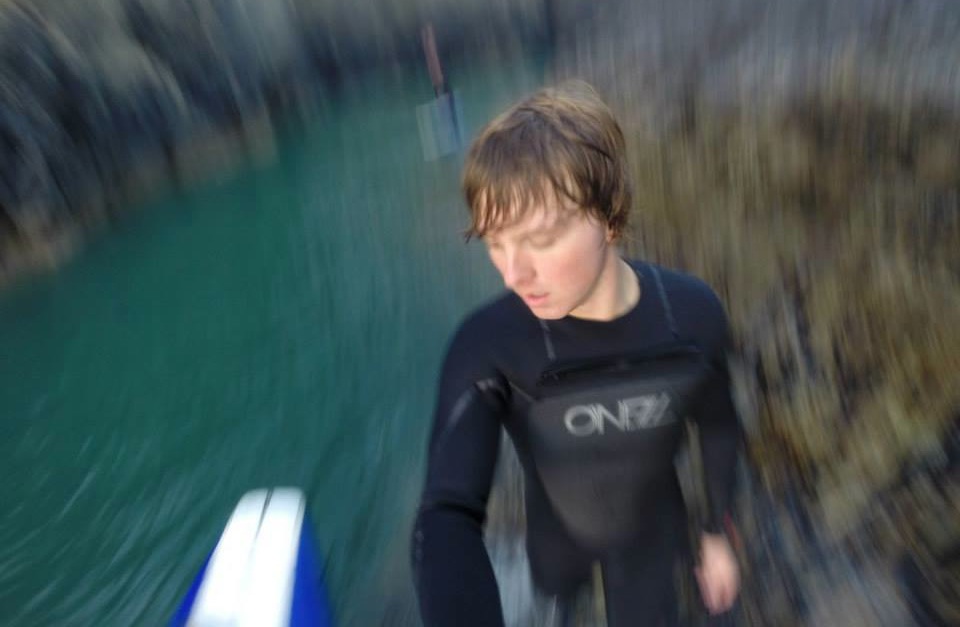 One day she gave me her number and told me to ring her that night to go back to her place. My mates were delighted. I was not. All day the lads where telling me to go and asking, "what's there to think about?" I was planning on faking meeting up with her and going and waiting it out somewhere. Throughout the day I was getting unhappier and unhappier about it, and the lads could tell.

That night we got on the beer and I said enough is enough and turned to mate and said to him "man, I'm sorry, I'm gay." I thought that I had made a huge mistake at that point until he got the biggest smile and started saying "really?". At that point I had never met someone who was so happy for me. He was happy because it was a huge weight off my shoulders.

We did a lot of laughing that night. It truly was a huge weight lifted off my shoulders.

Are you glad you came out?

I wouldn't change it for the world. I spent a lot of my young teen years feeling like a complete loner and a total outcast because I am gay. It led to a lot of issues in school.

I spent years thinking a lot about how much easier it would be if I was dead. I would cut myself, not just because I felt like it would ease a lot of pain but also so on the off chance someone would notice me in my early school days. Depression wouldn't be my greatest friend at the best of times, and battling with coming to terms with my sexuality and wanting to be liked didn't help this.

I went from being bullied to being the bully as a youngster and it's still something that I regret to this day and beg those who I bullied for their forgiveness. I thought that if I picked on others then somehow people would see me as tough and never question my sexuality. I'm still ashamed. The thought of putting another youngster who was also dealing with themselves through torment still eats me up inside, even though that was a long time ago.

When I finished school and I came out to my friends, I was able to finally relax and the kids who I would label the "cool kids" started to like me for being me. That has formed into strong relationships and helped mould me into the person I am today.

I am the person I am today because I came out. Even though I still battle demons I wait until I'm in the water on a wave to lash out instead of going after myself or others.

I am the person I am today because I came out. Even though I still battle demons I wait until I'm in the water on a wave to lash out instead of going after myself or others. People finally like me for me, and I have a feeling that coming out and being true to myself has something to do with that.

What has been the best part of coming out?

The best part has been people's reactions to finding out I'm gay and being able to break a stereotype of gay people, especially when surfing.

I'm in Taiwan at the moment for a surfing competition trying to qualify for the world tour, and I was surfing up the coast the other day with some well-known pros. The surf was big as it was a swell coming off a typhoon hitting the north of Taiwan. I took off on a big one and had a big drop. I bottom turned and stood up in the barrel and came out. When I came in, I was chatting with one of the pros and he was laughing and said he had seen the film that I am in talking about being gay.

"I had no idea gay dudes liked to pull into bombs," he said. It's probably the best compliment I've ever had coming from this surfer.

There is of course other surfers better than I am out there and who can surf bigger waves than I can. Some of them are still in the closet. But can you imagine what kind of impact they could have by coming out and turning heads by charging hard.