Acrobatic gymnast Ryan Ward and his partner Kiley Boynton achieved a first for the U.S. in the sport by winning the Acrobatic World Cup mixed pairs event in Geneva, Switzerland, this weekend. Ward, from Riverside, Calif., is openly gay and the gold medal helped him achieve an athletic goal.

Ward told Outsports more about his sport via email as he was traveling back to Los Angeles:

"Acrobatic Gymnastics is a combination of dance, strength, stamina, balance, flexibility, endurance and beauty. Acrobatic Gymnastics involves partner work where each person uses their 'partner' as apparatus (a little different than Artistic Gymnastics which is most commonly known and seen on the Olympics). Kiley Boynton and I have been working together for over three years."

"I started training in this amazing sport years ago; I was enrolled into the sport by my parents at the age of 6, and am now 25 years old. My acrobatic partner and I currently have titles that include 2013 and 2014 National Champions, 2013 and 2014 Athletes of the Year for the USA, 2014 Bronze Medal World Champions, and 2015 World Cup Champions (our most recent title). We have traveled all over the world representing the USA internationally in France, Bulgaria, Portugal, Russia, Switzerland, Belgium, Germany, and Great Britain." 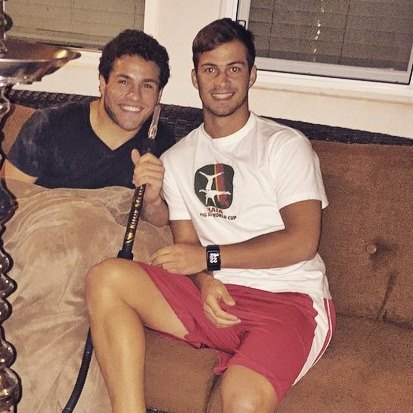 Ward was met at Los Angeles International Airport by family and friends, accompanied by his boyfriend Retief Vermeulen (right in the photo). The two have been dating for four years after a long-distance relationship between the U.S. and Vermuelen's South Africa.

I asked Ward about being gay in his sport and he gave an answer that is familiar to so many athletes who have come out:

"I have been out of the closet to my closest friends and closest family members for years. However, I just recently came out in my sport, to my father, and to the rest of the world. I felt like it was time to live truthfully for myself and to show pride in what my boyfriend and I have created and share.

"The support was overwhelmingly amazing within my sport. Obviously some people are a little uncomfortable at first by the thought. However, this is a new world, a new age, and the support that I have experienced, the acceptance that I have seen, and the love that has been shown to me is incredible."

Congratulations to Ward and Boynton for bringing home the gold and to Ward for adding his name to the growing list of out athletes.

Hat tip to Diane Klein for connecting me to Ward.

Here is one of their routines that won them the gold: