This gay college athlete played sports to make himself straight. It didn't work.

Like so many gay youth, Patrick Boland felt alone with in Minnesota with contemplations of suicide. When he finally came out to his team, his teammate responded, "Our bonds transcend that."

Share All sharing options for: This gay college athlete played sports to make himself straight. It didn't work.

I joined track and cross-country to make myself a straight man.

Religion had taught me that. I thought the attraction I felt was a punishment from God, some failure from my past that had taken me "out of the story" of being a "normal," "healthy" straight young man.

Through sports I got great friends. We worked out together. We stretched together. We did strength training together (according to our coach, so that "our mother wouldn't recognize us"). We sat together in the cafeteria. We drank together when the season ended. We were a team. We were the ‘Big O.'

But it didn't change me. Neither did trying to date a girl in the fall of my junior year. She was different than the girls I had tried to date in the past. I couldn't convince myself that the reason things weren't evolving was some fault of hers - she was perfect. I began to think there was something wrong about me, something deficient, something wrong. And at the same time, I began to develop feelings for another male, an athlete on the swim team.

You know how it is to fall in love as a guy. We're supposed to be "men," right? We don't share things. It's frowned upon by the culture. Power and vulnerability are incommensurate, except for celebrities who are granted a once-a-year free pass to "emote." And because of that isolation, romance can sometimes transform for us into a need - a safe space - the only way we can feel comfortable opening up and sharing intimacy.

Kentucky runner comes out to support from dad

Chase Ratliff was taunted while growing up but gained strength from his loving family. He wants to help other LGBT people struggling in rural areas.

Greg Arther had a boyfriend and supportive parents, and yet he still was depressed over his sexuality. He finally decided to take the plunge and tell the world.

In the "real" world, amongst our peers or on our sports teams, our emotions are shown displaced, as though through a mirror. The pumping of backs. A shared joke, often offensive. The late-night conversation that the next morning you pretend to forget.

I began to use running in those days not as a joyful pursuit, not even as a sport, but as an obsession, a catharsis. It became a drive, all the more obsessive for the way the obsession numbed me, made it harder to see what was happening in my life.

I remember in particular one sleety winter afternoon when I was walking through campus and saw a bunch of straight couples holding hands. I stared at the ground, walked faster and headed into the nearby science building. Lo and behold, there was a girl sitting in her boyfriend's lap, kissing him softly on the face. I felt the sudden urge to throw up.

I half-walked, half-ran to the gym, threw on a far-too light T-shirt and shorts, despite the freezing temperatures and the rain. I headed out at a quick clip onto the backroads that led away from the city.

The sleet. That electric gray winter sky that hurt your eyes to look at it. The heaving breath. Faster, faster, like an ache. I felt the blood pumping in my temples and I pushed harder, so the noise, the rush of its flow grew louder, and I could bury myself in the sound, like the ocean, wave, wave, crashing...

I stopped 10 miles into the countryside, hands on my knees, gasping for air. The horizon. The cornfields. The silence.

I studied the sky. I felt nothing but loneliness. My eyes welled with tears. It angered me to feel the tears.

I ran the 10 miles back at a near sprint, my body ready to break. I wanted my body to hurt. I wanted the pain so I wouldn't have to know what it meant.

I ended up sick a lot that season. I could only sleep about three to four hours a night. I would wander the campus at night just because I couldn't think of anything else to do.

When I finally admitted to a friend that I was confused about my sexuality, it was already too late. I left the next morning to head to the Regional meet. I ran three minutes slower than my normal pace. I collapsed at the finish line and my coach almost made me seek medical help. I told him I was fine. I got wildly drunk at the party that night, woke up still boozed at 4am to fly to a neuroscience conference in San Diego.

During one of the presentations, I became dizzy and disoriented. I nearly collapsed outside. I was brought to a local emergency room and was discharged with a diagnosis of dehydration.

Dehydration. As if that were the half of it.

The lowest point would come later, on a trip to Florida with my college friends. Most of them were in relationships. I felt like I was the only guy who had these feelings. I equated ‘gay' with weakness, with effeminacy. I was an athlete. I had become an athlete to NOT be this way. How could I still be gay?

When I came out I didn't lose a single friend. Even the ones who told me they weren't OK with it on a religious level ended up hanging out with me just the same way they always had before.

As I walked the beach alone that night, while my friends ran to get some snacks, I had an urge that seems foreign to the man I am now: I wanted it all to end.

I remember putting my feet in the water and thinking about swimming out, swimming and swimming and swimming into that moonless grey night, into the inky black waters that barely showed horizon, as though the ocean were washing away the ink of the world, and could wash away all my contours until I could just dissolve into the water until nothing else remained.

Another wave crashed against my feet.

I'm not one to endorse the idea of miracles, but I will say what happened next will remain with me for the rest of my life. A streak of brilliant green lit up the night sky and streaked down to the horizon. A shooting star. A shooting star on the night I contemplated suicide. It feels like a lie, the metaphorical absurdity of it, the way it seems to corroborate some cosmic significance to an ordinary life of an ordinary man.

My confident, optimistic nature today stems directly from that night: I saw death and chose to live.

It was reading day, before our final exams. The team had just run a 4x100m relay, which made us realize why we weren't all sprinters. We were gathered near the steeplechase pit. One of my best friends, and the team captain, told everyone I had an announcement.

The formality of it was unbearable.

"So... just wanted to tell everyone that I'm gay."

Dead silence. Well actually there were a bunch of girls on the girls' distance team screaming in the background while attempting shot put. Don't ask why.

I tried to break the ice a bit.

"...don't worry, none of you are nearly attractive enough for me."

There was a stray chuckle or two.

What I didn't realize at the time was that most of the team thought it was all some bizarre prank. It probably took another week or so to get everyone on the same page - that I actually liked men, in a way a little more than most guys. 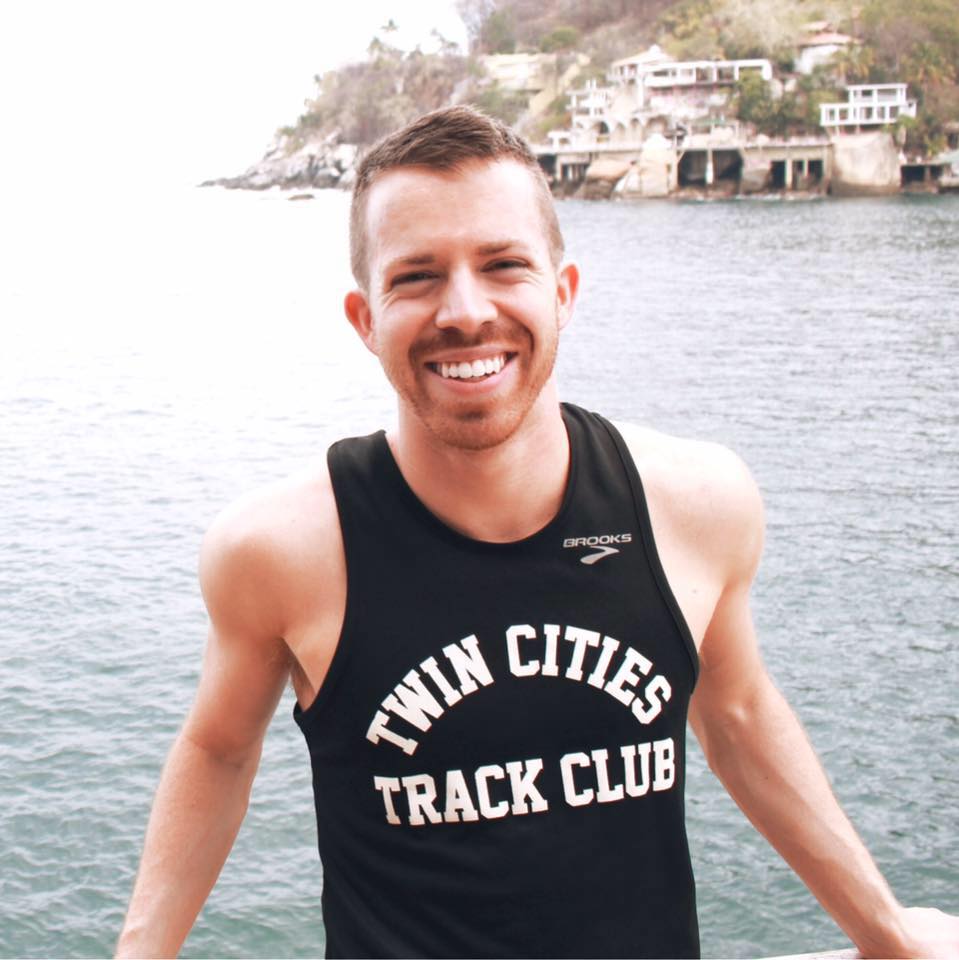 I remember a few days later, when one of my favorite teammates, a senior on the team at the time, got a little tipsy at a party, clasped me on the shoulder.

"Our bonds transcend that shit," he slurred.

And we laughed and talked about his girlfriend and dating and mortality, with that same mock-profundity that all frat boys get deep in the night, when they feel powerful and philosophical on the intoxication of beer.

When I came out I didn't lose a single friend. Even the ones who told me they weren't OK with it on a religious level ended up hanging out with me just the same way they always had before. They would ask if I was interested in dating anyone. It was strange - but so are sports teams in general. When outsiders ask about the cult-atmosphere, the camaraderie, you always just laugh and say, "You wouldn't understand."

That autumn I had one of my best cross-country seasons of my life. I finished 11th in the Central Region meet and raced with my team at Nationals. We didn't end up tapering well and had a mediocre team finish, not the first place my college team would get the following year. But we had run it. After the race, we piled into the van to drive home.

About an hour into the drive it began to snow. I fell asleep on one of my teammate's shoulders. The nine of us spent a few hours like this, drifting in and out of sleep, depleted, bodies raw and aching. At one point when I awoke, the radio was on. It was ‘Prairie Home Companion,' being broadcast from our campus chapel. At one point the narrator, Garrison Keillor, paused. Then:

"And currently the men and women's cross-country teams are returning from nationals."

And you could hear the catcalls and applause muted through the radio static.

I remember smiling to myself and looking out the window at the snow falling, the glowing orange orbs of streetlights breaking up the sea of darkness as we sped along the road home.

I was heading home.

This coming out story isn't about being gay. It isn't about telling others the truth. It isn't even about learning who you really are.

This story is about brotherhood. It's about a central component of all sport: uncommon, unlike people joining for a common purpose. It's about the fact that two hours into that soccer practice, or those swimming laps, or those football drills, or that Sunday long run, when all of you are quiet except for your heaving breath, and there's this...feeling....

There's no word for it. It's something all of us who have trained as athletes understand. It's something so fundamental and beautiful so as to make everything else in life seem trivial. In that moment, you don't need to feel powerful, or be seen, or be admired. You don't need it seen on Facebook. You don't need to love or be loved, or to understand the feelings you get on a beach in the throes of young adult life. You just want to sweat and heave and breath and push yourself, just to know who you are.

Come out not to change the world.

Come out because you're an athlete.

Come out because you know what you're made of.

Patrick Boland is currently a third year medical student at the University of Minnesota - Twin Cities. You can reach Patrick on Facebook, on Twitter @patrickjboland0, or you can email him at patrickjboland0@gmail.com.