Fred Hartville finished an illustrious career at the Univ. of Illinois as Tanner Wilfong retires from diving. Plus, Randy Lane leads UCLA to a top-five finish and Jenny Allard has Harvard softball on a roll.

University of Illinois senior gymnast Fred Hartville experienced a moment at the NCAA National Championships where he paused. After finishing his vault, Hartville looked around the Columbus, Ohio, arena and took it in as he realized his career was complete.

The 2013 NCAA vault champion and two-time Big Ten vault champion was not competing for individual honors this time. Injuries, particularly a torn Achilles tendon that kept him out the start of the 2016 season, meant his role was to help Illinois' team score.

Hartville scored 14.750, which was the second best score on the Illini team. And with that, his career ended April 16.

He competed at this year's national championships despite having strep throat. Even with that, Hartville posted his best vault score of the season during the April 15 preliminary competition, with a 14.950, to help Illinois reach the Team Finals.

Even though he didn't score as well the next day, Hartville takes pride that he landed his career's final vault.

"The vault on Saturday was a little rougher than on Friday, but one of the biggest things I've dealt with over my past four years is fighting for landings," Hartville said. "For me to stay on my feet, even though historically I would have fallen with the vault I did Saturday, to me meant a lot."

At the NCAA Women's Gymnastics National Championships in Fort Worth, Texas, UCLA assistant coach Randy Lane (right, in photo below) helped the Bruins to a fifth-place finish as a team. It was their best finish since 2013.

The women on the team jumped and celebrated like they won when their fifth-place finish was announced. UCLA entered the national championships ranked No. 8. 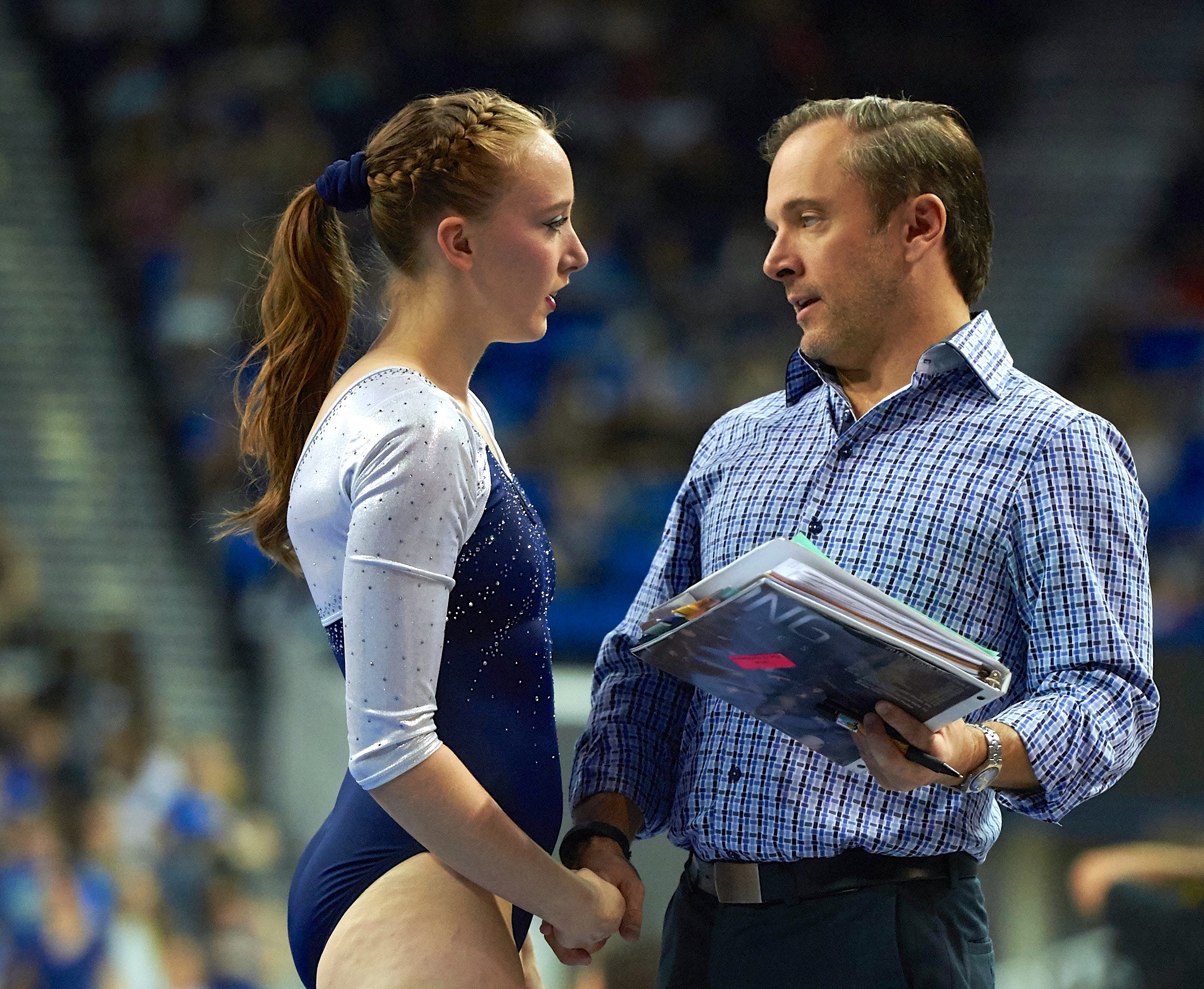 "Our team was kind of this anomaly in the sense that we were just there having a good time. No matter where we finished, it was a great accomplishment," said Lane, who primarily coached vault this season. "Seeing their jubilation at the end was really genuine, and it leaves a real warm spot in your heart."

Lane, who has been coaching college gymnastics since 1992, said he has been out to employers and athletes since he started coaching. He did his first interview about being gay in 2013 with the GymCastic Podcast.

"I've been very comfortable with who I am and in my skin for a long time," Lane said. "It's just a part of me."

Names in bold are people that have announced publicly they identify as LGBT.

Lauren Miranda (senior, Duke women's rowing) helped the No. 2 Varsity 8 boat win two races against Saturday at the Dale England Cup Regatta near Bloomington, Indiana. Her boat had times of 6:47.3 against Indiana and 6:45.5 against Notre Dame.

Tanner Wilfong (redshirt junior, Miami men's diving) announced on Facebook on April 11 that a persistent back injury has forced him to end his diving career. Wilfong had qualified to compete at this U.S. Olympic Trials in June, but he will not compete in the trials now or use his final year of eligibility at Miami. Wilfong finished second in platform diving at the ACC Championships in 2014 and 2016.

Jenny Allard (head coach, Harvard softball) has her team playing well. The Crimson (25-14 overall, 13-3 Ivy League) are on a six-game win streak and have lost once in their last 15 games.

Alanna Carvalho (sophomore, Erskine women's lacrosse) scored her team's goal in a 21-1 loss to Limestone on April 19 as the Flying Fleet went 0-3 the last two weeks to finish the season 0-10. Carvalho scored 19 goals and had three assists in those 10 games.

Greg Arther (sophomore, Wisconsin-Platteville men's track and field) decided to not compete the entire outdoor track and field season because of academic opportunities that arose, which included a geography conference in San Francisco.

Michael Drougas (sophomore, Oberlin men's tennis) won his No. 2 singles and No. 2 doubles matches Saturday against Allegheny to end the regular season. The Yeomen (14-7 overall) enter the North Coast Athletic Conference tournament, which starts April 29, as the No. 4 seed.

Max Korten (senior, Moravian men's track & field) missed the last two meets with a bone bruise on his knee. Korten expects to return before the end of the season.

Mark Kroll (senior, Coe men's tennis) played singles for the first time this year, and he earned a 6-1, 6-2 win at No. 6 singles April 13 against C.J. Cliff of Central College. Kroll went 2-1 in doubles the last two weeks, and is 7-4 this season in doubles.

Ben Larison (senior, Coe baseball) played in nine of 10 games as the Kohawks went 4-6 the last two weeks. In Larison's best game, he went 2-for-3 with three runs, a stolen base and an RBI against Buena Vista on April 12.

Chandler Whitney (junior, Mitchell baseball) started in left field all 11 games the last two weeks as the team went 5-6. Saturday's loss against Lesley was one of Whitney's best game, as he had a double, a triple, and scored twice.

Andres Bustani (senior, Lewis-Clark men's tennis) contributed to his team winning the Golden State Athletic Conference tournament April 21 to earn a berth in the NAIA National Tournament. Bustani lost in singles and doubles during his team's 5-2 championship win against Westmont. In the April 20 semifinal, Bustani won in doubles and did not finish his singles match. The NAIA tournament pairings are scheduled to be announced May 9.

Erik Hall can be reached via email at hallerik7@gmail.com or on Twitter @HallErik or on Facebook. If you are an out LGBT athlete or coach and want your accomplishments recognized, email Erik.