This transgender college volleyball player is headed to the NCAA

Chloe Psyche Anderson is headed to UC-Santa Cruz to play volleyball. She shares her physical and emotional struggles as a trans athlete transitioning genders while competing.

Share All sharing options for: This transgender college volleyball player is headed to the NCAA

Editor's Note: Chloe Psyche Anderson has been a part of the women's volleyball team at Santa Ana College for the last couple of seasons. This fall she is headed to UC-Santa Cruz to play in the NCAA Division III. You can read more about her at the Orange County Register in a great column by Jeff Miller. Here Anderson talks about the struggles of her transition and illuminates the difficult journey every transgender athlete at the collegiate and elite levels must make. We dare you to find an "unfair advantage" here.

An overwhelming silence permeated through the walls of the coliseum once full of violent cheers and excited screams, only to be broken by the sound of distant laughing and volleyballs bouncing on the hardwood floor of the gymnasium.

The crowd had already left as the remaining players from the opposing team laughed in the glory of their victory as they played for fun, taunting us as we huddled in the corner. My hip was bruised and I lifted up my jersey to see a large scrape opened up with blood staining my spandex shorts. Both knees had become battered and red from the amount of diving my body had endured in the match. Despite giving my best effort, I could feel the gears within myself grinding and howling with pain as I struggled to catch my breath.

Our coach folded his clipboard into his arms and pressed it against his chest as he looked at the team with disappointment - disappointment not in our playing, but in the opponents making fun of me on the court, for I'm a transgender athlete.

In high school I was the slowest on the track, last to finish running bleachers, always combating my asthma. I put in my best effort despite always suffocating in my own efforts: first one to get tired in the match, first one to throw up after a long day of conditioning during hell week, always struggling to keep up with the others. Athletics was never easy. I would spend hours on my own time, bumping balls against a wall or jumping up stairs to improve my vertical, juggling as perfectly straight as I possibly could to make sure I could improve my form and control.

Through all the pain, I was still last in running, last to finish conditioning. But soon my vertical jump began to exceed others' on the team who were quicker and had better endurance. I was dedicating six hours on weekends to just jumping and running up and down bleachers. I would run until I was winded, jump until my legs felt as if they would fall off my body in pain.

I felt like a failure in a sport I loved. My grades slipped and my apathy toward life itself was gradually increasing as I was soon ineligible for athletics. My time as a men's volleyball player had come to an end.

Stephanie Shostak considered leaving her career as a top volleyball official when she came out as trans. The welcoming messages she got from Volleyball Canada and US Volleyball assured her she could be out in sports.

Alex Singh talks about the powerful impact being on his high school's boys' lacrosse team has had on him.

Many years passed as the empty pit inside me began to consume my entire being. I almost felt as if I was the incarnation of apathy itself, staring into an empty computer screen trying to bide my time until my health failed me. I felt stagnant as a person in my soul. Being a man was something I never identified with, something that always eluded me despite my life forced in its shoes.

Starting hormones was the motivation to change my very essence into that which I had always dreamed. Every wish leading up until that point was purely to have been born as a girl, and I could never grasp why it was all I ever wanted, aside from it was who I am. It's who I still am today. Though I've come to realize I'm all right being born the way I was, I'm growing happier with myself every day.

Upon beginning hormones I began my workout regimen again. I picked up cycling and began lifting weights. The heaviest weight lifted off my shoulders was playing volleyball again at my local community college P.E class. I was super excited that my form was still in good shape, and my ability to hit hadn't been hampered too badly by the years of not playing.

Yet hormones were about to play a dirty trick on my mind and body. Going up to swing at the ball I found myself suddenly too slow, having bizarre aches in my shoulder that felt as if a red-hot iron was being pressed against the muscles deep beneath my skin. My timing was off by about half a second, then a second, and before I could even adjust my body was two seconds behind on my approach.

My male muscles that I had developed since puberty were disappearing at an increasingly painful rate. My running slowed down, my swinging got weaker, my vertical jump diminished rapidly. I felt as though all the experience I had accumulated over the years had vanished, as it was like riding a bicycle for the first time. Something I had done so often and had practiced for so long with masculine muscles meant absolutely nothing with the new muscular structure my body was developing.

It was painful to see how slow I had become again, to feel my hips wobbling when I ran instead of being squared up in a full-blown sprint. My coordination had changed, and I needed to realign my mind and body to be proficient. A life goal of mine had always been to play women's volleyball, and I wouldn't start community college full-time until I had met all the legal requirements and had reached a point where I was decently satisfied with my athletic ability.

After four years of being out of high school and two years on hormones, it was about time for my body to be exposed to the collegiate sports in which I had longed to participate. I was sadly mistaken at how acclimated my body was to collegiate conditions. My lungs had returned as one of my biggest enemies, giving me close calls from having asthma attacks.

I couldn't afford any form of surgery, so I felt ashamed and bad having to constantly "tuck" to participate with the other girls, which brought on a whole new level of pain I had never experienced. I used a spandex onesie, which didn't allow my body to sweat properly, and I frequently found myself overheating and showing signs of early heat stroke during the autumn matches in the 90-plus degree weather.

My body wasn't used to the harsh conditioning and the constant running. It had become extremely fragile from having close to zero testosterone in my body, far less than the other girls who were competing on my team with me. Every injury stuck with me until the very end of season. I had many conversations with my coach about my body and having no idea how to deal with the stresses of collegiate sports, since I have never had a women's body in a competitive sport before. It was like opening Pandora's Box and watching everything slowly fall apart. 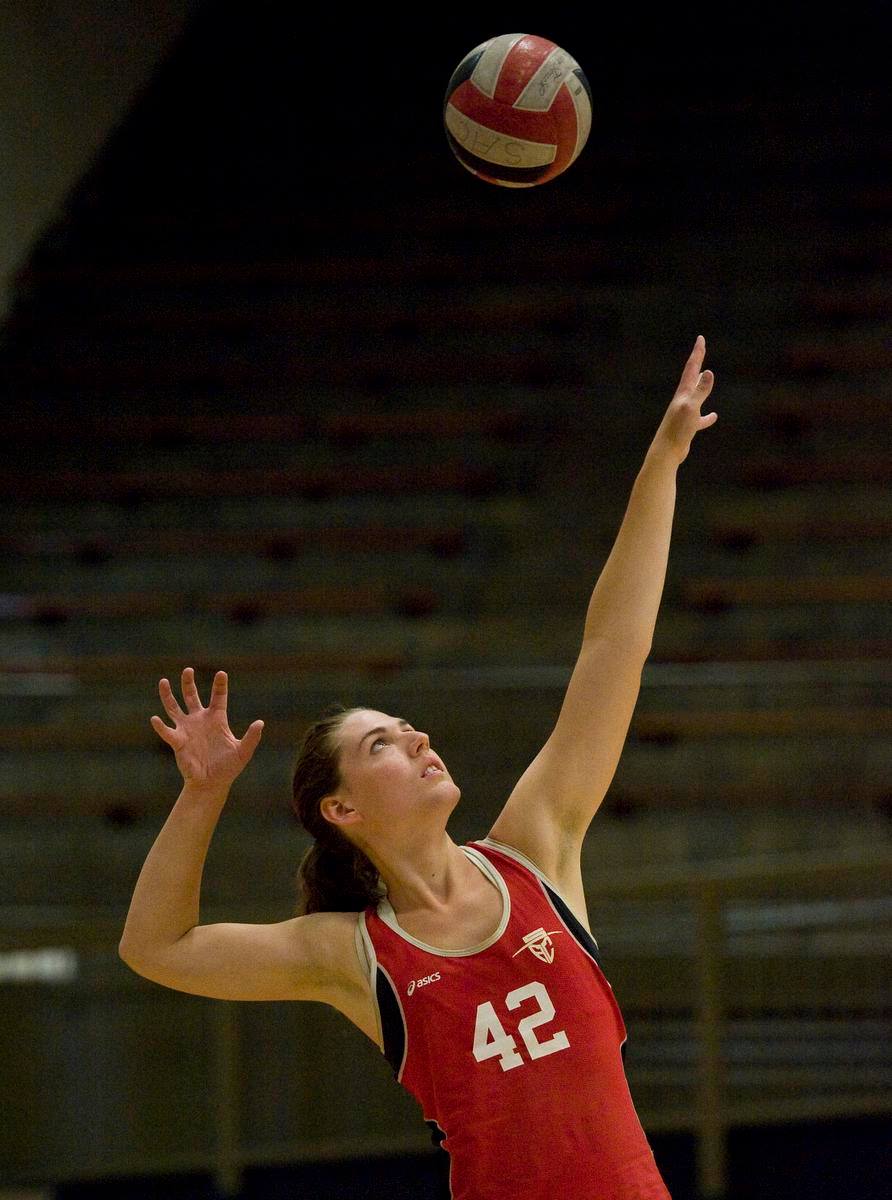 As if my body and mind weren't already a hurdle, coming out to my team and finding friends my first year was extremely challenging.

My coach had gathered the whole team together in a conference room. I sat silently at the head of the table opposite my coach and had him tell the team that I'm transgender. I felt anxious and could feel my whole body shaking and sweating as I was afraid the team would not accept me. Everyone turned to me and stared right after my coach spilled the beans.

My experiences in men's volleyball in high school were generally void of close bonds with my fellow athletes. I never felt the need. On the women's team I did find the need - strong bonds were key for the team to succeed. However, feeling socially lost between the cliques that had formed earlier in my first season, I didn't feel close to anyone on the team. It was stressful for me, never having been exposed to such a social situation before.

Throughout the season I felt my coach was the closest person to me on the team, having accepted me almost immediately and constantly encouraging me to keep playing and do my best to help our school win. He's become very close to me, and I hope we are friends for a very long time.

Following my first indoor season our team participated in the inaugural season of beach volleyball. It presented its own challenges, having less players on the court and having to move through sand, though my knees took much less of a beating. My teammates and I began to bond during beach and I felt for the first time that I was a welcomed part of women's athletics.

Still, my body was wreaking havoc on my mind and ability to stay calm and cool in games. My coordination was better, footwork needed a lot of improvement, and my arms had become weaker but no longer hurt. My body had reached a point where I wasn't superior to my fellow athletes, despite being told constantly that I have a physical advantage.

I'm still last on the track, still last to make it through running bleachers - hormones haven't changed the playing field as far as my body is concerned. I'm still constantly practicing on my own to keep up with the others, running on weekends for four to six hours again, doing my best to make sure that I can compete with others. Having less testosterone has actually made it more difficult for me to recover from athletic events as well as build up muscle. That doesn't mean I don't give my best effort to try to beat them whenever I can - Sports are competition, after all.

Even after losing a match and having the other team try to humiliate us, sports are also about picking ourselves up and doing our best to make sure next time we'll give them hell. That motivates me every day.

I guess that's what makes me an athlete.

Chloe Psyche Anderson can be found on Facebook. You can also reach her via email at chloe.p.anderson92@gmail.com.

Story edited by Cyd Zeigler. Photo above courtesy of the Orange County Register.