Share All sharing options for: Matthew Mitcham speaks out 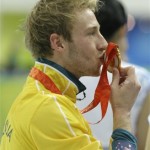 Matthew Mitcham, the gay Australian diver who made Olympic history, says he was surprised to be the only out male among the more than 10,000 Olympic athletes during the Beijing Games. He spoke out this week in his first press conference since leaving Beijing about his status, his vacation and the future.

"It's a little bit sad I think, because statistically there should be a lot more but, you know what, it's each to one's own. I'm not going to pressure anybody else to come out of the closet because it's their own choice. But I'm proud to be there, proud to be that one, that lots of other people can look up to."

Mitcham spoke in his first press conference since the Olympics, when he wowed television audiences and gay fans across the globe with his come-from-behind performance to win gold in the 10-meter platform. The diver says he's refreshed after a recent vacation in Rome with his partner.

Mitcham recently signed with sports manager Dave Flaskas, who also manages the career of fellow Olympian and Australian Ian Thorpe. The diver hasn't inked a sponsorship deal yet, though Flaskas says he's fielding a number of pitches and looking to China.

He sees marketing potential in China, where Mitcham was adored and will treat the diver in the same fashion as the other superstars in his stable.

"The strategy for Matthew will be worked in the same template as it is for Thorpey, Cadel Evans, Leisel [Jones]," Flaskas said. "They all have different challenges, they all have different personalities, it's not going to be a quick grab for deals [but] obviously there is a priority because of the financial situation."

Mitcham hopes the sponsorship deals will be lucrative enough to keep him away from the office. He wants to focus on diving and not a work grind.

"Money was a huge stress leading into the Olympics for two years and for that to not be a massive burden on me leading into the next Olympics would be nice," he said. "But that's an ideal world and who knows what's going to happen."