You can't spell implosion without L-I-O-N-S

Share All sharing options for: You can't spell implosion without L-I-O-N-S 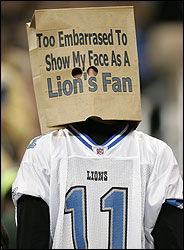 Daunte Culpepper had just marched his team down the field again. A Jason Hansen field goal had just capped a 36-yard drive. Detroit had just gone up 17-0. It finally looked like Detroit was going to get off the schneid and make these t-shirts worthless. There was just one problem: There was still another 45 minutes of football left to play.

Tampa Bay then woke up and weaved a hellacious fury that would make King Leonidas say "Damn." The Buccaneers hung up 35 unanswered points before Detroit was finally able to get another score. And later just to prove their point, the Bucs scored again. The end result was a final score of 38-20. With Detroit taking their record to 0-11, and the Bucs maintaining their first place tie in the NFC South at 8-3.
Things have gotten desperately bad in Detroit. There are 5 games left towards the ignominious honor of being the first 0-16 team in league history (Tampa only lost 14 in 1976). Unfortunately for Detroit, all five are playoff contenders. They have 10-1 Tennessee on Thanksgiving, whom the Lions haven't beaten since they were the Houston Oilers, Minnesota the week after, then at Indy, home for New Orleans, and they finish at Green Bay. The Silver & Blue will be heavy underdogs in all 5 games, with the Saints & Vikings being the only two that may be under double-digit spreads.

So, yeah, it looks real bad, and nothing is on the horizon to make a significant change this season. Maybe they should get these guys to play for them, they're showing more life than anyone on the field. Well as they say, on any given Sunday -- or Thursday.