Peeking at David Beckham in the locker room

Share All sharing options for: Peeking at David Beckham in the locker room 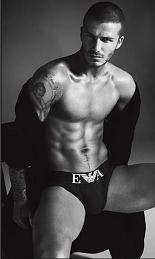 One of David Beckham's new teammates on AC Milan, Marco Borriello, said last week that he can't wait to take a peek at Becks in the nude:

I must admit I have a dressing room curiosity over Beckham.I want to see if he is equipped as he is in the Armani underwear adverts.

I'm left wondering what the reaction would have been if Borriello was openly gay? His comments were met with mostly chuckles, but what if he was gay? My bet is we'd have players and fans saying, "This is why we don't want gay people in the locker room." Instead, you now have a (presumably) straight guy tracking down Becks in the locker room and staring at his manhood. Why is that treated so differently from if a gay guy had said it?