Deion and his gay pal are a hit on Oxygen

Share All sharing options for: Deion and his gay pal are a hit on Oxygen 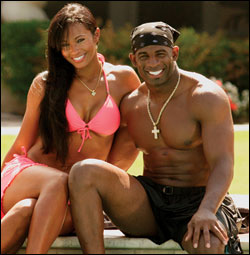 I know I wasn’t the only one quite surprised a month ago when I wrote that not only was Deion Sanders starring in a Bobby Brown-esque reality show, Prime Time Love, but that the show was going to be on Oxygen. So I also know I can’t be the only one shocked that the show brought in the network’s highest ratings for a series premiere ever. According to several sources:

Then again, considering what other original series Oxygen has put its stamp on, I guess I shouldn’t have been too shocked.

I saw the episode. Meh. The storyline (Deion and his wife Pilar battle on the radio with their NFL picks; and of course [spoiler ahead], Pilar wins the bet) felt really staged, Deion wasn’t particularly funny (though, why is he riding around on a little scooter in his house?), and his kids and wife were bland. The one character who certainly wasn’t bland was Gary With Da Tea, a personality on said radio show. The flamboyant entertainment guru for the radio show was hysterical (snapping in Z formation, if I saw it correctly) and brought life to an otherwise dull show. And Deion seemed like old buds with Gary and his "Glam Squad," who did a mini-makeover of Deion’s daughter. I’ll watch the show just to catch Gary; and if Gary shows Deion in a gay-friendly light (though, the post-episode promo showed Deion cringing at the thought of a prostate exam), I’m all for it. –Cyd Zeigler jr.