Share All sharing options for: The lame K.C. Royals calendar 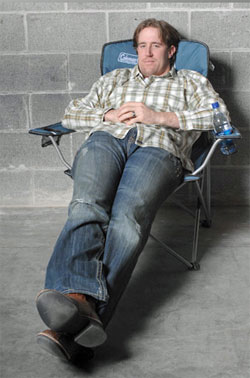 The man slouching in a beat-up camping chair is Kansas City Royals catcher John Buck, one of the “cover men” of the 2008 Royals charity calendar. It looks like he was shot on the loading dock of a Wal-Mart and the photographer was a Wal-Mart greeter. Makes you want to rush out and buy 100.

This is one of the more lame sports calendars I have seen. It has all the sex appeal of spending a morning buying drywall at a Home Depot and I can’t see what the target audience is. Some of the Royals are rather handsome (there are outtake galleries here) but they are so de-sexed that few straight women or gay men would find them hot. Where's the beef(cake)?

Imagine the Sports Illustrated swimsuit issues with the women in Hillary Clinton pantsuits instead of micro-bikinis. The calendar even makes the ultra good-looking Alex Gordon appear rather bland, not an easy trick. Contrast this with the smoking shots of the charity “Gods of Sport” calendar featuring Australian pro athletes. In the latter, the rule was the fewer articles of clothing the better.

This perfectly illustrates how most American jocks are loath to show any skin in their promotional ventures (Terrell Owens being one exception). I think it is mostly the fear of appearing too homoerotic and having to defend their sexuality. There are no Americans like English rugby star Ben Cohen, straight jocks who appeal to their gay fans (or female fans who like to see the result of all that hard training). Instead, we get the Royals, dressing their athletes in clothes right out of a JC Penney “Big and Tall” catalog from 1990, with lousy lighting and bad camera angles. If New York City firefighters can strip without fear of losing their masculinity, what stops athletes? –Jim Buzinski