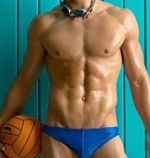 Following up on Finneye's post on sex at the Olympics, I noticed this interesting observation from the writer, Matthew Syed, himself a former Olympian: When it comes to sex, women want the winners and men want the hotties.

It is worth noting an intriguing dichotomy between the sexes in respect of all this coupling. The chaps who win gold medals - even those as geeky as Michael Phelps - are the principal objects of desire for many female athletes. There is something about sporting success that makes a certain type of woman go crazy - smiling, flirting and sometimes even grabbing at the chaps who have done the business in the pool or on the track. An Olympic gold medal is not merely a route to fame and fortune; it is also a surefire ticket to writhe.

But - and this is the thing - success does not work both ways. Gold-medal winning female athletes are not looked upon by male athletes with any more desire than those who flunked out in the first round. It is sometimes even considered a defect, as if there is something downright unfeminine about all that striving, fist pumping and incontinent sweating. Sport, in this respect, is a reflection of wider society, where male success is a universal desirable whereas female success is sexually ambiguous. I do not condone this phenomenon, merely note it.

While Syed writes about straight guys, I would wager the same holds true for gay men -- looks matter the most. This has been true of every Gay Games and gay sporting event I've participated in. Men are very visual when it comes to sexual attraction and would prefer the most attractive partner, not the most successful. Guys would hook up with a hot (to them) bench-warmer in a nanosecond over a champion who is not their type. It's a guy thing, not a gay thing.