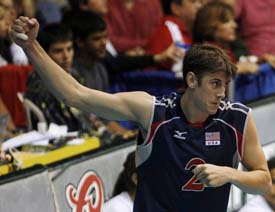 Pepperdine University is just up the coast from where I live and although I can't say I'm a fan of their religious bent I can say that I was a fan of their volleyball team, the Pepperdine Waves. The school had a great record in the sport, it was well supported by the student body, and the atmosphere in their gym was exciting. Among the many excellent players to recently go through the school was 25 year old, 6'9" outside hitter Sean Rooney. I watched him transform from a lanky, slightly impatient sophomore to a team MVP senior over the seasons. Eventually, he led his team to an NCAA championship. He dominated the net when he was on the court and the walls of the gym would echo when one of his kills struck the floor on the opponent's side.

After graduation, Rooney joined the AVP tour and played to a fifth place ranking three times in beach volleyball. He seemed to never quite realize his potential in the sport, even though he was the tallest player at the time, perhaps due to the differences between hard court and sand court play. It made complete sense, then, that he would return to indoor and join Team USA. He fought to be selected for the Men's USA Indoor Volleyball 2008 Olympic Team and is now going to China.

On the court, Rooney can be said to have a midwestern temperament (he hails from Illinois) -- you just don't see him get too excited over anything. Perhaps it could also be characterized as "intense concentration". But occasionally you will see the fire in him rise. And when the fire rises in someone who is 6'9", watch out!

Rooney has a classic farm-boy look about him, with legs and arms that go on forever. How he's going to look in the team uniforms after the controversial FIVB 4" inseam decision is anybody's guess. However, I can't say I'm unhappy that the team will be revealing a little bit more than they're used to. The more Rooney sticking out, the better!

Tune in to Men's Indoor Volleyball during the Olympics and look for #2, Sean Rooney.