Share All sharing options for: Favre traded to Jets 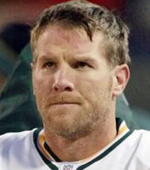 Our long national nightmare is over -- Brett Favre has been traded from the Green Bay Packers to the New York Jets. Maybe now ESPN can stop being All-Favre All-The-Time. In return for Favre, the Packers get the Jets' fourth-round pick in 2009 that will escalate to a first-round pick if he meets certain performance criteria, the NFL Network reported.

The NFLN also reported that if the Jets were tempted to trade Favre to the Minnesota Vikings (a division rival of the Packers and his preferred new team), the Jets would owe Green Bay three first-round picks, so that is not happening. Chad Pennington, the longtime Jets starter, will be released, media reports said. He is still a decent QB and someone will snap him up quickly.

I got bored with Favre's whole diva act quickly this summer and am glad to see the drama ended so quickly. Favre is going to a team that finished 4-12 a year ago, but made the playoffs in 2006 (the Jets have made the playoffs every other year starting in 2002 and missed them in odd-numbered years). They have talent and he will make them a better team, but a wild-card is about the most Jets fans can expect, being in the same division with New England.

Favre continues an NFL tradition of Hall of Fame QBs ending up their careers in odd places. Johnny Unitas went from the Colts to the Chargers; Joe Namath from the Jets to the Rams and Joe Montana from the 49ers to the Chiefs. Only Montana had any success in his new digs, taking the 1993 Chiefs to the AFC Championship Game. At least Favre will be wearing a similar color since both the Packers and Jets wear shades of green. And if you are wondering -- the two teams do not meet in the regular season again until 2010 and the only way the Packers will play against their longtime star is in the Super Bowl; highly unlikely from the Jets' standpoint. --Jim Buzinski