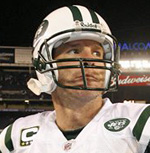 The San Diego Chargers became the third team with serious playoff aspirations to avoid starting 0-3 after their 48-29 thrashing of the New York Jets on Monday night football. San Diego (1-2) recovered quite nicely a week after having a win at Denver taken away from them on a blown call. The Jets meanwhile look about the same with Brett Favre (right) as they did without him the last few years -- a team that can play well in spurts but has trouble putting together a total game.

Favre is playing OK for New York from a statistical standpoint, but he threw two killer interceptions against the Chargers -- one returned for a touchdown and the other in the end zone as the Jets were mounting a comeback. He is clearly not yet comfortable in the Jets offensive system, but at 1-2 the Jets are far from panicking.

The Chargers joined Minnesota, Jacksonville and Seattle as 0-2 teams that played inspired this weekend to avoid an 0-3 start. In a season where no team looks dominant, staying in the thick of the race is all that matters. I still see San Diego winning their division. Denver is 3-0 but that comes with a huge asterisk, courtesy of their Week 2 officiating gift against the Chargers. The Broncos also allowed 502 yards to the Saints and had to survive a missed 43-yard field goal to hold on in that game.