From whom the Bell steals

Share All sharing options for: From whom the Bell steals 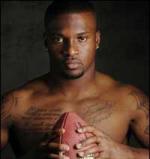 Ever steal a pen or a ream of printer paper when you've left a job? Well Tatum Bell (right) was cut by the Lions earlier this week after being replaced by Rudi Johnson. But as Rudi was meeting with Lions GM Matt Millen, Mr. Bell decided to take the tradition a little further, and stole Rudi's luggage. And to only make the story more awesome, when confronted about it, Bell said he thought he was picking up an "old friend's stuff", when they called her, she told the Lions that she hasn't spoke to Tatum in months. Simply stunning.
Rudi's former employer, the Southwestern Ohio Correctional Facility's Bengals, of course got him used to this sort of thing, so he seems to be okay but Rudi is still missing his ID and some money.