Share All sharing options for: Saints lose to Cowboys, unbeaten no more 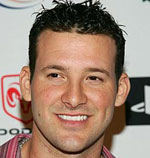 So much for two unbeaten teams meeting the Super Bowl. The Dallas Cowboys spoiled the New Orleans Saints' perfect season, going into the Big Easy to win, 24-17, Saturday night. The Cowboys never trailed and were the better team. The Saints had a last-gasp chance to play for the tie, but Drew Brees lost a fumble at midfield with six seconds left that ended the game.

Saints' fans need to be concerned, since their team has now played three subpar outings in a row. They got lucky to beat Washington in overtime when the Redskins' kicker missed a chip-shot field goal, and last week barely beat a Falcons team missing its starting quarterback and running back. This team has not played well since dominating the Patriots on Monday night four games ago, and look flat for three quarters against Dallas.

The Cowboys, who have been an awful December team, got a huge win and still control their situation in the playoffs. Tony Romo outplayed Brees, so the wolves will be at bay, at least until the Cowboys' next game. The Saints' loss leaves the Colts (14-0) as the only unbeaten team.