Share All sharing options for: Brett Favre, the ultimate diva 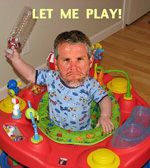 I am enjoying the reports out of Minnesota about how quarterback Brett Favre has no problem letting Coach Brad Childress who is running the team, and that it's not Chilly. On Sunday, Favre refused to leave the game when asked by Childress, with the quarterback airing the dispute publicly after, and not keeping it in-house.

Now come reports from ESPN that Childress and Favre battle over who should have the biggest say in running the offense.

According to sources, Favre dislikes that Childress seldom discusses the game plan with him during the week, and does not encourage the quarterback to offer suggestions as to which plays he feels most comfortable calling in certain situations. When Favre changes the play at the line of scrimmage -- using his film study and experience -- Childress bristles, even when the audible Favre calls works perfectly.

This should not be a surprise to anyone who has followed the Favre drama the past two years -- for No. 4, it's all about him, not the team. He's the ultimate sports diva. I have no great love for Childress as a coach, but it's a bad sign of your control when the quarterback consistently shows you up.

Favre is slowing down, his coach knows it, yet is powerless to stop it. That's the deal you make when you woo a diva. The Vikings are far from dead, but they desperately need to get the No. 2 seed and a bye to have any hope in the playoffs. I am hoping the implosion continues. Schadenfreude is a lovely thing.