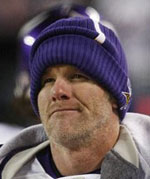 The final Monday Night Football game of the season was a doozy -- Bears 36, Vikings 30 in overtime on a Jay Cutler 39-yard touchdown pass to Devin Aromashodu. The end spoiled a terrific comeback by the Vikings, who scored 30 second-half points. It also continued a tailspin that has seen Minnesota lose three of four, with suddenly shaky playoff prospects.

The biggest cheers this side of Chicago came from Philadelphia, where Eagles fans now see their team in control of the NFC No. 2 seed and a bye, and from New Orleans, where the Saints locked up the No. 1 seed with Minnesota's loss.

The Eagles (11-4) get the No. 2 seed if they beat Dallas (10-5), not an easy task considering the Cowboys won their first meeting and this game is in Dallas. Minnesota needs to beat the Giants and have the Cowboys beat the Eagles to secure the bye. The Cowboys and Cardinals are also alive for the No. 2 slot, but both need to win and get some help (scenarios here).

Losing the bye could be fatal to the Vikings (11-4). This would mean no two weeks of rest for 40-year-old QB Brett Favre, who can really use it. Despite his second-half heroics against a depleted Bears defense, Favre has not played well the past month. While the Vikings will be a favorite in their playoff opener at home (where they are 7-0), it's hard for me to see them winning consecutive weeks on the road (a likely task if they don't have a bye).

For weeks, the Saints (13-2) and Vikings looked like locks to meet in the NFC title game, but both teams have hit a wall, leaving the conference wide open. The Eagles, Cowboys, Cardinals and even the Packers suddenly look like threats to make a deep playoff run. One would be crazy to bet a lot of money on any outcome.