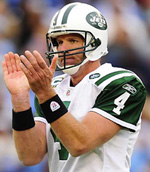 SI's Peter King says Brett Favre is retiring again. So where will he end up next year? Tampa Bay? Arizona? My guess is that he'll actually stay retired this time. The last three months have been brutal for Favre, with loud whispers of him tainting his legacy. My guess is guys like King have told him, no matter how much he wants to play, he risks doing real damage to his name. Besides, if any NFL team front office would have him anyway, they should have their heads examined. Would the Jets even want him back? My guess is this is part his choice, part being shown the door for the second time in a year, and part no other opportunities out there for him.