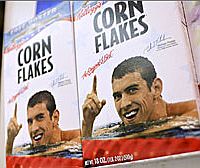 It was one toke over the line for Michael Phelps as he was suspended from competition for three months by U.S. Swimming. Kellogg's also announced it would not renew its endorsement contract with Phelps, which expires at the end of the month.

"This is not a situation where any anti-doping rule was violated, but we decided to send a strong message to Michael because he disappointed so many people, particularly the hundreds of thousands of USA Swimming member kids who look up to him as a role model and a hero," U.S. Swimming said in a statement. "Michael has voluntarily accepted this reprimand and has committed to earn back our trust."

Phelps apologized after a photo appeared that showed him smoking from a bong at a party last fall in South Carolina. The world swim body FINA issued a statement earlier this week supporting Phelps, but U.S. Swimming took a different tack. Phelps' coach Bob Bowman told the AP that the swimmer accepted the federation's decision.

"Michael's been through a lot and he's learned a lot, hopefully," Bowman told The Associated Press during a telephone interview. "I support him and I want to see him do better. I'm here, as always, to try to help him move forward. He's learned some tough lessons and he's disappointed a lot of people, me included. ... I certainly understand USA Swimming needed to take action. We will certainly abide by everything they've put down."

Phelps had planned on competing at a meet in Texas in March, but is now banned until May. The world championships this year are in Rome in July. U.S. Swimming also has withdrawn any financial support for Phelps, 23, to train.

The suspension is no big deal and seems more about U.S. Swimming protecting its image than it is of punishing Phelps (not that I think he should be punished for smoking pot). Phelps has plenty of money and can train on his own without other financial support. In addition, the interest in the world championships in July has now soared. Meets in non-Olympic years never get much attention, but the Rome meet will get huge international focus. This could be the start of the Michael Phelps Comeback Tour. America always loves a comeback.