The magic wears off for new ballparks

Share All sharing options for: The magic wears off for new ballparks 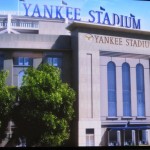 It's a good week if you're a fan of the Mets (no) and Yankees (yes). The New York teams open a pair of new ballparks at a cost of more than $2 billion, with the Mets splitting their first two games in Citi Field and the Yankees opening tonight. If history is an indication, the month of April in their new homes will be good. Unfortunately, it won't last. 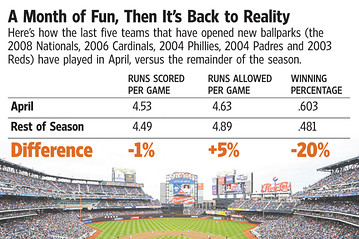 The Wall Street Journal, numbers gurus that they are, took a look at the performance of the five major league teams that have opened new stadiums in the last six years. In April in the year of the opening, they won six of 10 games. The rest of the season? They didn't even win half of their games. (The Braves, my hometown favs, opened The Ted in 1997 with a torrid 12-2 record in April.)

If there's an April advantage for teams with new ballparks, it probably has its roots in pitching and defense. Maybe the home team's advance knowledge of the quirks of the yard -- and how to exploit them -- give them a palpable edge in the earlygoing. On the whole, these five clubs allowed slightly fewer runs per home game in April than they did later in the year.

But after that first glorious month, the magic wears off. From May 1 forward, the winning percentage for these teams in their new surroundings plummeted to .481 -- a pace that supports only 78 wins in a season.

Looks like the Mets have a new excuse for collapsing in September.