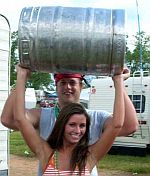 Talk about inflation -- the Detroit Lions have signed Georgia quarterback Matthew Stafford to a $70+ million contract with $41.7 million guaranteed. The Lions, 0-16 in 2008, will pick Stafford first in Saturday's NFL Draft. In contrast, two years ago, the top pick, quarterback Jamrcus Russell by the Raiders, got "only" $29 million guaranteed.

It is an odd system that pays untested rookies gobs more money than veterans who have proven themselves (Ben Roethlisberger, who has won two Super Bowls, signed a contract last year with about $33 million guaranteed). At least Stafford won't have to lug around beer kegs anymore; he can just buy a brewery. I have not seen Stafford play much, but for those who did, is he going to be an NFL success?