Share All sharing options for: North Carolina wins a blowout 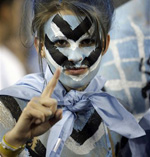 The North Carolina Tar Heels started the men's college basketball season as No. 1 and ended it that way with an easy 89-72 win over Michigan State in the final at Detroit. The Tar Heels were so dominant they scored a record 55 first-half points and had the biggest halftime lead ever in 21 points. They won all six tournament games by at least 12 points.

Michigan State played like it was nervous, committing 20 turnovers, many of them unforced, and being very impatient in their shot selection. The result was a dull championship game that was never in doubt. I imagine TV sets all over the country clicked off the game at halftime and never came back. Thus ends the worst NCAA tournament ever. At least I picked the winner correctly in the Outsports pool, won by Ribbie of Tampa, Fla.