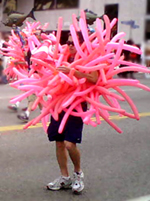 I attended the Gay Pride Parade in Los Angeles today and visited the Pride Festival in West Hollywood. I've been to four of the last five New York parades (or "marches" as organizers in NYC call them) and had been to most of the five before that in L.A. As I walked away from the festivities today, I couldn't help but think, "Why do I come to these things?" Part of attending this year was an invitation from a friend and my partner not having been to the L.A. parade before. But after two hours of watching men in chaps on motorcycles and guys in their underwear handing out postcards for porn and politicians angling for our vote, I was left wondering, Where are the sports?

The Barnacle Busters SCUBA club was there (dressed as anemones, pictured). L.A. Frontrunners and Cheer LA were there. But in two hours of watching sex and politics and the furthest fringes of the gay "community" pass by, it was a little disappointing to see that the sports groups and mainstream sports fans are not more prevalent in the parade. They are in New York City, but not in L.A.

It left me wondering how well-represented are sports in the Pride celebrations of other cities. Do they march or are they featured in Philadelphia? Boston? Chicago? Dallas?