Share All sharing options for: Bad timing: Nadal on cover of NYT Magazine 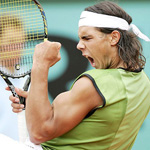 The cover story in Sunday's New York Times Magazine was on Rafael Nadal, timed to coincide with the start of Wimbledon. The same Wimbledon that Nadal has to skip because of knee problems. The article makes a reference to Nadal possibly dropping out, but since these stories are assigned months in advance, it's clearly a case of bad timing.

It is still an interesting read for tennis fans and Nadal comes across as a likable sort; his coach, Uncle Toni, comes across as the grounded guiding force that keeps Rafa from getting a big head. Speaking of big, the story does focus on Nadal's large biceps as part of his appeal:

Nadal's arms, both of them, have inspired over the years a fervent subgroup of admirers, especially once he began appearing at international matches in what became his trademark outfit: sleeveless shirt, wide headband knotted around the unruly hair and his celebrated piratas, rakish knee-length shorts that made him look like a surfer who lifted weights in his spare time. When Nike altered the ensemble early this year, in what everybody involved insists was a mutual decision by the company and Nadal's entourage (the idea was to move him into something more grown-up), there was a brief but spirited insurrection among the fans.

The story, though, fails to go into any detail of how Nadal built his arms -- gobs of weightlifting or genetics combined with normal tennis training? There is a reference that his shoulder development is genetic, but with such fascination about his biceps, why not ask Rafa about them?

The story notes the women who shriek like preteens when they see Nadal, but ignores his gay fan base, which loved the photos last fall of him showing his bare butt while on a boat.

There are two more examples of bad Nadal timing: He was named the fittest man in the world by Men's Fitness and also made the cover of Vogue, with photos shot by Bruce Weber. Nadal seems to have been selected as this summer's It Boy, now blown up by his loss at the French Open and his withdrawal from Wimbledon.