Serena Gets Crafty with Trophy Case

Share All sharing options for: Serena Gets Crafty with Trophy Case 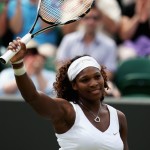 It's a good thing Serena Williams wins a ton because I'm sure she needs the storage space.

The 10-time Grand Slammer revealed she has an interesting use for all the hardware she's accumulated over her long career.

The second seed told the press after making the semifinals at Wimbledon:

I mean, I use some of my trophies for makeup brushes, so, you know, maybe I'll just take a step back and be like, Hmm. Take all the makeup brushes out and really appreciate every title and every trophy.

WTF?! I guess if all the hardware's going to take up space you might as well put it to good use.

She also revealed the trophy-of-choice is from Indian Wells, a tourney she and sister Venus have boycotted since 2001 (they year ReRe won) due to the infamous, racially-charged incident involving the sisters and the crowd.