Share All sharing options for: Does girlfriend tarnish Steve McNair? 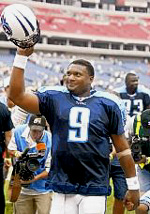 With all the deaths in the last couple weeks, the fatal shooting of Steve McNair was like another body blow for fans. It left me wondering, when is this going to stop? One aspect of the media coverage has been of interest to me in particular. Over and over, I hear nonchalant mentions of McNair's "girlfriend" as the other dead party. McNair is married to another woman. Some reports have been non-judgmental about his extramarital affairs. Others have included judgment about it; and it kind of feels a little crappy to scarring the guy's reputation 48 hours after he's killed.

One that sticks out is that of one of McNair's former coaches, former Baltimore Ravens head coach Brian Billick. He threw McNair under the bus and said his reputation will be forever tarnished. It smacked to me of the same holier-than-thou stuff we hear about being gay. It left me wondering what kind of reaction guys like Billick wouldn't just have to gay people, but also to the harder-to-define relationships that so many gay men enter into.

I'm personally not willing to pass judgment on McNair. I don't understand his marriage. I don't know how he and his wife defined their relationship. And, a lot of people are saying how much McNair did for charities and the like. He was a tough player and often very fun to watch. I'm just not willing to put an asterisk or a scar on his name.