Is synchronized swimming a sport?

Share All sharing options for: Is synchronized swimming a sport? 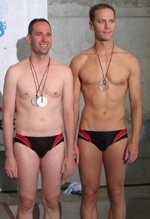 While covering the recent World Outgames in Copenhagen, I watched a bit of the synchronized swimming event (which had one of the better crowds of the week) and then had an engaging conversation with Canadian synchro swimmer Andrew Delaware.

Delaware, along with synchro partner Nathan Doidge, won a bronze medal in duo synchro in Copenhagen and was very passionate in standing up for his sport that is perhaps best known for the classic "SNL" skit starring Martin Short and Christpher Guest. As impressed as I was with Delaware, though, I remain dubious that synchro is a sport.

There is no doubt that performing synchronized swimming takes skill and athleticism. Delaware credits his time playing water polo with strengthening his arms to be able to perform high lifts. And I agree that the Olympics are discriminating against men by making synchro a female-only event. But a sport? I think of it more as a performance.

The dictionary definition of "sport" ("an athletic activity requiring skill or physical prowess and often of a competitive nature") is so broad that it can cover everything from basketball to chess, so we are left to our own judgment. Maybe it's the artistic nature of synchro, where competitors are judged on their choreography, that throws me. I just can't seem to wrap my arms around it as an athletic competition. Performers in Cirque du Soleil are also very athletic and skilled, but no one considers what they do to be a sport. But then again, I don't consider golfers to be athletes, so my definitions are likely more narrow than most people.

What do you think -- Is synchronized swimming a sport? And what, in general, is your definition of a sport?